1st Anniversary of Attack on US Consulate 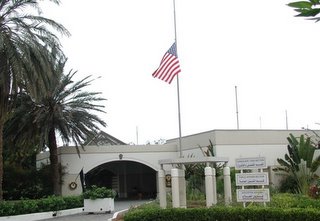 EXACTLY one year ago today, the US Consulate in Jeddah was attacked by four heavily armed Saudi terrorists, who were believed to be affiliated to Osama Bin Ladin’s Al-Qaeda terrorist network.
Lobbing grenades at the guards on the consulate’s Hail Street side entrance, they shot their way into the grounds, shooting at two diplomatic vans that were entering at the time.
Bulletproof glass saved the lives of the vans’ occupants, including Vice Consul Monica Lemieux and the Consul General herself, Gina Abercrombie-Winstanley.
American officials at the time insisted that no US employees had been harmed, but Saudi sources had told us about the one American diplomat, Lemieux, who had suffered minor injuries to her back. We only later found out that the consul herself had been in one of the vans. As my colleague Roger Harrison told me, “Having a gun fired at you, even through bulletproof glass, must have been nerve-jangling.”
Four hours later, after burning down a US Marine house and using consulate employees as human shields, three of the terrorists, reportedly from Madinah, were killed by Saudi commandos. At least five consulate employees were killed and seven wounded in the attack.
The consulate remained closed for several weeks, despite the arrival of a 50-strong contingent of US Marines to secure the facility. It reopened on January 29, 2005, after massive cement blocks were lined up on Hail Street, sealing off that entrance to the consulate.
To read a full transcript of the press conference held by Ambassador James Oberwetter in Jeddah on Dec. 7, 2005, click here.
The new consul general, Tatiana C. Gfoeller, is reportedly busy planning the new consulate that is being built near the airport, well away from its current city center location on Palestine Street. Workers are allegedly being imported from Turkey to build the new consulate, which should be ready by 2007.
I visited the consulate a few weeks after the attack to talk with a political affairs officer. I saw the cracked glass front doors of the main chancery building lying on the ground, a testament to how many times the terrorists had shot at the bulletproof glass trying to get in. These doors have now been replaced by fortified metal ones.
Here’s what they looked like after being shot at: 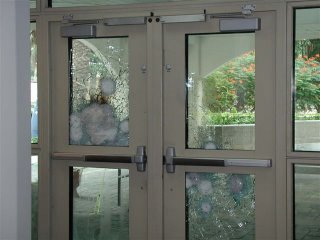 It will be sad once the US Consulate moves from its Palestine Street location to a newly-built fortress on the city’s outskirts. It has been at its current location since 1952, and it is unfortunate to have to see American diplomats hunkered down behind fortified walls because of the threat of some demented terrorists.