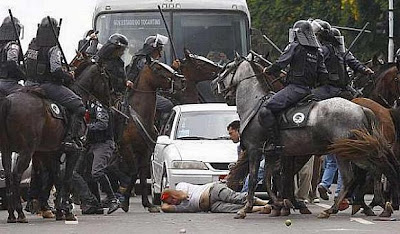 Mounted military police attack a lone protester on
the ground in Brasilia on Wednesday.
THE embattled governor of the Federal District, Jose Roberto Arruda, announced his departure from the Democratas party yesterday at a press conference during which he read from a prepared statement. He did not take any questions from the press.