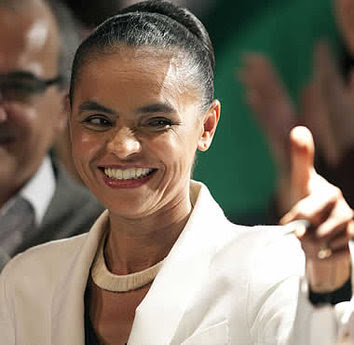 THE Brazilian presidential elections will go to a second round on October 31 after Dilma Rousseff of the Workers Party (PT) failed to win an absolute majority of 51% of the popular vote in yesterday’s nationwide elections. The final tally gave her 46.8% of the vote, with her runoff opponent Jose Serra winning 32.6% of the vote. Marina Silva of the Green Party (PV) did exceptionally well, garnering nearly 20 million votes across Brazil. Surprisingly she came in only third place in her home state of Acre, but came in first in the Federal District (home of the capital Brasilia) with 41.9% of the votes.
Dilma spent Sunday night holed up in the presidential palace with President Luis Inacio ‘Lula’ da Silva watching the election returns. She and the president were reportedly disappointed that she didn’t make it in the first round, but Lula had repeatedly said during the campaign that he would not be surprised if she did not make in the first round, noting that he too had never made it in the first round the two times he was elected. Dilma delivered a statement to the press at around 11pm last night, thanking her opponents for a good fight and said she would reply to questions today at a press conference in Brasilia at 4:30pm. A last minute corruption scandal involving Lula’s now former chief of staff, Erenice Guerra, which was brought to light by Veja magazine just two weeks before the elections, is thought to have put off some voters who were going to vote for Dilma. The big question now is who are the voters who voted for Marina in the first round going to vote for next?
Marina Silva’s political trajectory has been nothing if not amazing. She grew up in the Amazon jungle, the daughter of a poor rubber tapper. She only learned how to read and write at the age of 16, and then worked as a domestic helper to support herself as she put herself through university. She became an environmental activist alongside her friend Chico Mendes, who would later be murdered on the orders of a rich farmer who disliked their activism. Elected first as a city councilor in Rio Branco, the capital of Acre, Marina was eventually elected senator. Lula then picked her to be his environment minister, where she often clashed with big land owners who wanted to be able to cut down more trees to make more pasture land for their cattle. She eventually resigned from her post after clashing with Dilma Rousseff, who at the time was the chief of staff of President Lula. Marina then left the PT and joined the Partido Verde. She will definately go far, so look for this fighter to be a candidate in Brazil’s next presidential elections in 2014.
In the Federal District, the race for governor is also going to a second round after Agnelo Queiroz of the PT won 48.8% of the vote and Weslian Roriz (PSC) won 31.5%. Mrs Roriz is the wife of the disgraced former governor of the DF Joaquim Roriz, and has zero political experience. Her husband dropped out of the gubernatorial race just days before yesterday’s elections after the Brazilian Supreme Court came to a tie when voting on whether or not he could run this year based on a new anti-corruption law called Ficha Limpa which disqualifies candidates who have been found guilty of corruption, or who have in the past resigned from positions in order to avoid losing their political rights to run for office in the future. Roriz resigned from his position as a senator in 2002 when it looked like he was about to be found guilty by the Senate of corruption and would have been banned from holding public office for eight years. His wife Weslian performed so badly in the only televised debate she participated in with other candidates for governor before the election, that clips of it have become a hit on YouTube.
While Joaquim Roriz will be remembred for encouraging thousands of poorer Brazilians to come to the Federal District by giving them land to live on, and which have now become full-fledged satellite cities of Brasilia, he is also known for building the JK bridge and the metro system in Brasilia, which both had significant cost overruns (or superfaturamento in Portuguese).
The fate of other corrupt politicians in these elections is also uncertain as they wait to hear whether the Supreme Court will clear them or not. Paulo Maluf of Sao Paulo, who received 500,000 votes on Sunday to return to Brasilia as a congressman for his state, could be barred from being sworn in again if the court rules against him. He is accused of hiding millions of dollars from the tax agency by laundering it abroad through his private company, and for the superfaturamento of chicken for school lunches when he was the governor of the state of Sao Paulo in the 1980s.
On a lighter note, a comedian who goes by the stage name of Tiririca, and whose elections ads on TV featured him saying “vote for Tiririca, as it cannot get any worse,” while wearing a blond wig, outraged many Brazilians, with a judge demanding that he submit himself to a literacy test to make sure that he could read and write. Not surprisingly, as the ultimate anti-candidate, Tiririca won 1.3 million votes to be a federal deputy for Sao Paulo in Brasilia, the highest number of votes ever in Brazil’s history for such a post!
Share: