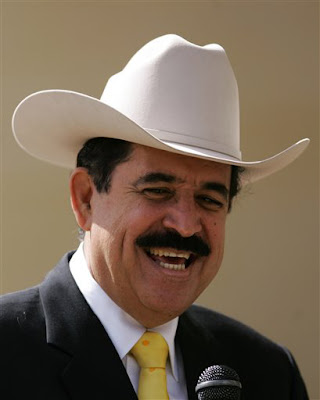 The interim leader of Honduras Roberto Micheletti has assured Brazilian President Lula that his government will respect the sovereignty of the Brazilian Embassy grounds, but noted that he would give the Brazilians five to ten days to either hand over Zelaya to Honduran authorities, who would immediately jail him for the charges of corruption filed against him, or give him political exile in Brazil.
For Lula and the Obama administration, neither of these options are solutions that they favor. Both the US and Brazil want Micheletti to allow Zelaya to be reinstated as president, at least until presidential elections in November.
Micheletti said on Tuesday night that he was willing to talk to Zelaya, but the deposed president rejected the offer saying that Micheletti was not being sincere.
Several Brazilian analysts have said that Brazil will only lose in this game of cat and mouse between Zelaya and Micheletti. The former Brazilian ambassador to the UK and the US, Rubens Antonio Barbosa, told the Brazilian website G1 that Brazil had lost the possibility of being a non-biased interlocutor in talks between the two sides as soon as it took Zelaya’s side by giving him refuge in the Brazilian Embassy.
Barbosa added that the Brazilian government was giving itself a huge headache by helping Zelaya and that Brazilian authorities had not evaluated the seriousness of the tense political situation Honduras when it gave refuge to him in their embassy. “It’s interference in the internal politics of a country,” he said.
But President Lula has been resolute in his support of fellow leftist Zelaya, noting in New York on Tuesday that Latin American countries would no longer tolerate coups.
But Lula is playing a dangerous game. On Tuesday thousands of Zelaya supporters were violently dispersed from in front of the Brazilian Embassy by military troops using tear gas, truncheons and rubber bullets. Power and water were cut off to the embassy on Monday to try and force Zelaya out, but were restored on Tuesday. Instead, land telephone lines to the embassy were cut on Tuesday. A curfew was put into effect on Monday, which expires tonight.
The potential for violence and mayhem at the Brazilian Embassy in Tegucigalpa is great. Brazilian officials keep insisting that their embassy would never be breached by Honduran troops or officials. I say, never say never.
Share: