Brazilians in shock at gasoline prices: $7 a gallon! 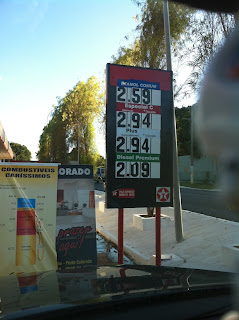 GASOLINE prices rose again last week in Brasilia to an eye-watering R$2.94 a liter, or $1.85 a liter. In US gallon terms, that’s a whopping $7.03 a gallon, something that American drivers would never accept.

Here in Brazil, the public has grown accustomed to heavy government taxing of fuels, despite a government program started in the 1970s to use alcohol as fuel for cars in an effort to reduce dependence on petroleum products. All gasoline in Brazil has alcohol added to it, in a 75% gasoline to 25% alcohol mix, and most cars built here have flex engines that can run on either gasoline or alcohol.

Brazil has long touted its self-sufficiency in oil production, importing oil only occasionally to meet spikes in demand. Indeed, its recent find of offshore oil below a four-kilometer wide layer of salt in the seabed, has been heralded as a chance for the country to become an oil exporter.

In the meantime, however, greedy sugar cane growers have been busy exporting huge amounts of Brazil’s sugar and alcohol production because they realized they could get more money for them on the international market than at home. This has pushed local sugar prices to extremely high levels, with a 5-kilo package of refined sugar selling for R$10 ($6.30) in supermarkets. This also pushed alcohol prices for cars to R$2.84 a liter at the pump, making it uneconomical to use in flex cars. Alcohol burns faster in car engines than gasoline does, so to make it worthwhile for car owners to use alcohol as a fuel its price must be less than R$2 a liter.

The administration of President Dilma Rousseff has said that it intends to reclassify alcohol as a fuel so that it can regulate it better. Alcohol is currently classified as an “agricultural” product. It also said it was thinking of taxing sugar exports at R$4 a kilo as a possible emergency measure to force sugar cane growers to export less sugar. Incredibly, Petrobras, the national Brazilian oil company, was forced to import alcohol from the United States this year to mix in with the gasoline it sells in the country. By law all gasoline has to have at least 20% alcohol in it, so fuel distributors were blaming this requirement for the escalating price of gas at the pump.

The price of gasoline in Brasilia has already been hiked three times this year, and gasoline station owners had warned that prices would reach R$3.03 a liter this week. Thankfully, the main fuel distributor in the country, which is owned by Petrobras, announced today (19/04/2011) that it was not going to pass on another increase in gasoline prices to fuel station owners because the new crop of sugar cane has begun to be processed at sugar mills around the country, easing supplies that had been stretched because of record exports and the inter-crop period.

There are two solutions to ending the sky-high prices Brazilians pay for gasoline: Either take out the alcohol that is mixed in to it, or cut the hefty federal and state taxes that are levied on gasoline. According to the Syndicate of Fuel Station Owners of the Distrito Federal, 37.75 percent of the cost of a liter of gasoline sold here goes to taxes: 24.58 percent in local taxes and 13.17 percent in federal taxes. Cutting those taxes would certainly ease the pain at the pump that consumers are feeling, but I doubt that there is any political will to forgo this revenue either on the federal or local level. As for taking the alcohol out of the gasoline, a federal law would have to be amended to do so, which means that Congress would have to agree to this, which would take time and be politically-fraught.

Brazil needs to rethink its commitment to renewable sources of energy, such as alcohol, and make it a national priority it once was. The first step is reclassifying alcohol as a strategic fuel. Then they need to discourage sugar producers from exporting so much sugar and alcohol. Certainly, the strength of the national currency, the real, has to be reigned in by lowering the interest rate, which at 11.75% a year, is sucking in huge amounts of dollars from overseas, further weakening the exchange rate with the US dollar. Higher fuel and sugar prices are already pushing the inflation rate up, and Brazil is therefore not expected to contain inflation to the rates it predicted it would at the beginning of the year.