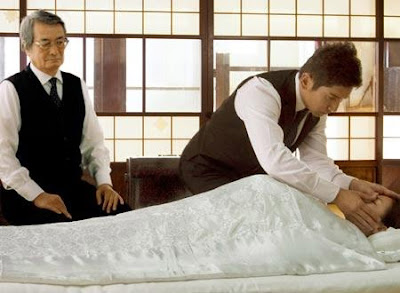 Tsutomu Yamazaki and Masahiro Motoki prepare a body for a
funeral in a scene from Departures.

WATCHING Departures on Saturday night with two friends at the CasaPark movie theater in Brasilia, I learned how much the Japanese honor their dead.

Winner of this year’s Oscar for Best Foreign Film, I had forgotten that fact when I chose the movie for us to watch. I had read positive snippets about it online and the main actor, Masahiro Motoki, was more than handsome to enjoy watching for more than two hours.

Daigo Kobayashi (Motoki) is a violencello player in a Tokyo orchestra and is soon out of a job when the owner decides to dissolve the orchestra. Faced with unemployment, Daigo returns to his hometown with his relentlessly chirpy wife Mika (Ryoko Hirosue). She can never say ‘no’ to her husband, and soon becomes a Japanese version of a Stepford Wife. We wanted to wring her neck, she was so annoyingly positive.

Answering a classified ad entitled ‘Departures’ in a newspaper, Daigo thinks he is applying for a job at a travel agency, when in fact he finds out it is a funeral agency that prepares the bodies of the deceased to enter the after life.

The funeral agency is headed by a wonderfully grumpy Ikue Sasaki (Tsutomu Yamazaki), who soon teaches Daigo the fine art of cleaning and preparing a body for a funeral.

Daigo, ashamed of doing a job that is looked down upon in Japan, does not tell his wife the details of his new job, which she later finds out when she discovers an instructional video on body preparation starring her husband. This is when she finally becomes nasty and selfish, giving her husband an ultimatum: either leave his “disgusting” job or she will leave. He refuses, so she flounces off to stay with her parents.

Since my own father just died last December, I found the movie very moving, especially the scenes where Daigo is shown lovingly washing the body of his own father. It reminded me of how I too helped wash my dad’s body before his burial.

I must admit that I cried several times during the film, as well as half of the audience from the sniffling sound of wet noses that I heard.

Departures is an excellent movie, and I highly recommend that you go see it if you haven’t yet.