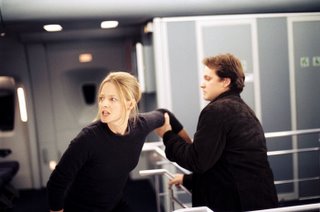 I watched Jodie Foster’s latest thriller Flightplan a few weeks ago when I was on vacation in Manila. As usual, Jodie delivered an excellent performance as the distraught widow returning to the US with the body of her husband who has apparently committed suicide by jumping off the roof of their apartment building, and her young daughter.
The action really begins when Jodie takes a nap on the plane and wakes up to find her daughter has vanished. Nobody seems to remember having seen her daughter, when Jodie runs frantically runs around the huge aircraft looking for her. One is left with just the tiniest of doubts that Jodie has completely lost it, until the excellently sleazy and creepy Peter Sarsgaard makes his appearance as the Homeland Security plainclothes guard on the flight.
I won’t say more as it would give away the rest of the plot, which sort of falls apart at the end.
One must also point out that the whole film does seem to be an extended commercial for Airbus’ new A380 double-decker jumbo jet. Take a look at this picture of the plane’s upper deck, complete with leather chairs and a funky bar/lounge: