Garci, We Don’t Believe You 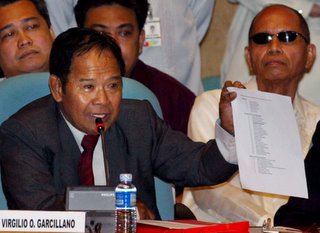 Virgilio Garcillano holds up a list of politicians he spoke with in the 2004 election before the House of Representatives on Wednesday. (Photo courtesy EPA)

I WATCHED former Commission on Elections commissioner Virgilio Garcillano being questioned by congressmen on Wednesday about the infamous “Hello Garci” tapes, and I must say that I was not impressed by what I saw.

His nasal, childish voice was annoying to begin with, but it was his refusal to answer many questions, because he claimed it could endanger the pending case he has before the Supreme Court, that I found the most incredible. What nonsense is this? Since when is a quasi-criminal suspect allowed to pick and choose what questions he is going to answer, especially in front of Congress?

All of this is really not surprising since Garcillano shot all of the little credibility he had left after the election when he disappeared in June, going to Singapore and then slipping back into the Philippines a few weeks ago. If one is as innocent as Garci claims to be, then why disappear for so long?

His bevy of bodyguards and legal advisors, provided I’m sure courtesy of his patron President Gloria Macapagal Arroyo, have served to only further obfuscate and distort anything that will now come out of Garci’s mouth.

Garci rattling off the long list of names of politicians, both pro-administration and opposition, who had allegedly called him during the 2004 elections, was clearly meant to scare all of Congress into treating him with kid gloves. This he unfortunately seems to have achieved, with most congressmen not pressing Garci too hard during the hearing.

Garci only looked flummoxed once when opposition Rep. Roilio Golez kept insisting that he read from the “Hello Garci” transcript, since Garci said that he couldn’t recognize his own voice on the tapes, in order for the House of Representatives to get a feel for his voice.

The fact that Garci is now claiming amnesia about how many times he spoke to the president last year, and feigning not recognizing his own voice on the tapes, is of course part of a wider plot to discredit the tapes now that President Arroyo seems to be have survived the storm of accusations of cheating in last year’s elections.
The former Comelec commissioner should be grilled hard next Tuesday when his questioning resumes in the House. The Filipino people deserve to know the truth, and the House should arrest Garci if need be and keep him jailed until he spills the beans on the dirty tricks he used in favor of President Arroyo and her cronies. That would be a shocking Christmas indeed for the president and her allies.