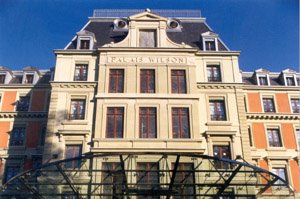 Palais Wilson in Geneva, Switzerland, home of the OHCHR

NOTTINGHAM, England – Last Sunday I and the other ten Chevening Fellows on the human rights course at Nottingham University flew to Geneva, Switzerland, to visit the United Nations Office of the High Commissioner on Human Rights and attend a session of the Committee for the Elimination of Racial Discrimination.

Having lived in Geneva as a child from 1966-1975, I was eager to go back and see what the city now looked like. I had actually dreamed repeatedly of going to where we had lived, Le Lignon, and revisiting the many memories that I have of that place and of the people we knew there.
“If you have time, go to Lignon and see what’s happened to it,” my mother told me by phone from Jeddah.

As luck would have it, our extremely tight and packed schedule in Geneva didn’t give me enough time to go out to Le Lignon after all, but I did have the satisfaction of seeing it from our plane’s window as we landed in Geneva, and I pointed it out with glee to my Malaysian traveling companion Astanah.

Not only that, but it is home to the European headquarters of many US multinational companies such as Proctor & Gamble, Dupont and Caterpillar.

With a permanent population of only around 250,000 inhabitants, Geneva regularly swells with an influx of diplomats, government officials, businessmen and tourists that flock to the city every year.

It is also one of the most expensive cities in Europe, if not the world, where a ten-minute taxi ride can easily cost Sfr30 ($25). Indeed, the flagdown when you enter a taxi is a steep Sfr6.70 ($5.50), so that the fact some Geneva taxi drivers were engaging in a wildcat strike the day after we arrived by refusing to pick up passengers at the airport on the day that the world famous Geneva Auto Show opened, was a little much to swallow.

But the story I liked best was told to me by Astanah about how ambassadors from developing countries posted to Geneva were struggling to make do without servants until they could negotiate an exemption from tough Swiss labor laws. You see, there is supposedly a minimum wage of Sfr2,000 ($1,666) a month that all employers must pay their employees. As Astanah rightly pointed out that’s more than the salary of many ambassadors from poorer countries, who had been counting on bringing servants in from home and paying them much lower salaries than the Swiss minimum.

While I could see the quandary that the envoys were in, I said the diplomats should ask their governments for special funding if they wanted to have servants in Geneva. It’s as simple as that.
****

THE Office of the High Commissioner on Human Rights, who by the way is the well-known Canadian judge Louise Arbour, is housed in the grand Palais Wilson on the banks of the Lac Leman.

Palais Wilson was built in the late 19th century and started out as a hotel that was then turned into the Palais Wilson for use by the United Nations. A devastating fire in 1987 gutted the inside of the building, which was then completely rebuilt.

With only 600 employees, 300 of them in Geneva and 300 working in the field around the world, the OHCHR likes to complain that it is underfunded, getting only 1 percent of the whole UN budget, and underappreciated.

And since the UN Secretary General Kofi Annan has repeatedly said that he wants to see human rights issues mainstreamed into every aspect of the UN’s work, one can easily agree that the OHCHR needs more funding.

****
GUATEMALA was presenting a regular report to the Committee on the Elimination of Racial Discrimination on the day that we attended and listened to the proceedings as non-governmental observers.

We sat in a long room with floor-to-ceiling windows on each end. The committee’s chairman and Guatemala’s representatives sat on a dais, while the rest of the committee sat below in rows facing each other. We sat the other end of the room, and listened to the proceedings through headphones that piped in the simultaneous translations of the UN translators who sat in glass-enclosed booths on one side of the room.

When I got tired of listening to the girly, high-pitched voice of the elderly woman who was doing the English translation, I would switch to the Chinese translators who sat in their booth looking extremely bored and barely translating what was being said.

After sitting through nearly three hours of mind-numbing rhetoric from both sides, giving me a clue of what it’s like to have to sit and listen to Third World dictators give interminable speeches, we broke for lunch.

****
THE UN, and the OHCHR in particular, are extremely worried about what is currently happening in Iraq following the US and British invasion in 2003.

Following the tragic bombing in late 2003 of the UN’s headquarters in Baghdad in which many UN personnel were killed, including the then Human Rights High Commissioner Sergio Viera de Mello, the United Nations pulled all of its people from the country, and was reduced to monitoring the situation from neighboring Amman in Jordan.

UN personnel began returning to Baghdad last year, and there are now around 11 people monitoring the human rights situation in Iraq for the UN.

The United Nations has been focusing its efforts in Iraq on what it likes to call “capacity building”. This means providing technical assistance for the training of Iraqi government officials from the Ministry of Justice and Ministry of Human Rights. The UN is also helping the Iraqis to set up a national human rights body.

But if you think UN officials are openly criticizing the US/UK invasion of Iraq, think again. This is the ultimate world of diplomacy, where rebukes are finely couched in such flowery language that one can sometimes be fooled into thinking that they are complimenting the US, while in fact it is the opposite.

The UN official in charge of the Iraq desk in Geneva, Christine Meinecke, told us that the UN had had a special rapporteur on Iraq until 2003 when the mandate was withdrawn. I pointed out that it was because the Bush administration had insisted that the rapporteur only look into abuses under former strongman Saddam Hussein and not be allowed to look at abuses under US occupation.

She refused to openly agree with my analysis of the situation, saying only that there were not enough votes in the UN to extend the rapporteur’s mandate, so the UN felt it wise to back down. In code-speak, that means the US was too powerful to be overcome if it came to a vote showdown at the United Nations.

THE BUZZ as we left Geneva to return to Nottingham was that the UN was going to change the UN Commission on Human Rights into a Human Rights Council, reducing its membership to 48 members and issuing an annual global human rights report on thematic issues.
According to unconfirmed reports, the US was going to vehemently object to the council being formed. We’re still waiting to hear if they will object and why. If they do, many agree that the idea of the council will be seriously imperiled.