How NOT to run an airline efficiently 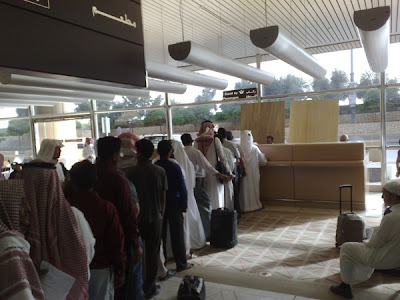 The line of passengers at Riyadh airport waiting to get on flights Wednesday.

“WHERE are you flying too?” the Bedouin looking Saudi man asked me.

“Jeddah,” I replied in a slightly exasperated tone.

I was standing in a line of fellow passengers, 60-deep, all of us clamoring to get on a Saudi Arabian Airlines domestic flight to Jeddah, Jizan, or Tabuk, from Riyadh airport.

It was Wednesday, the beginning of the weekend here, and the last three days of the week-long Spring break for Saudi schools. So these two factors meant that demand for any empty seats on all flights was especially heavy.

As I stood in line for two hours with around 100 other people, I noticed that most of us were law-abiding citizens who waited for our turn at the ‘Stand by Passengers’ counter where two overworked Saudia employees registered the names of passengers who would later be given boarding passes to get on flights that their website and reservation centers kept saying were fully booked.

What was amazing was watching the many Saudi men who tried to cut-into the line, pushing themselves unfairly to the head of the line. Luckily for us, there are many fair-minded people nowadays who are not afraid to voice their disapproval in public of rat-like behavior. They shouted “Sira, sira!”, which means “Line, line!” in Arabic. The fact that most of these line crashers were extremely shameless meant that these exhortations had little effect on them. But the Saudia employees were veterans at dealing with such people, and they always politely but firmly told them to go stand in the line like everyone else.

What surprised me was that many of these lazy and selfish passengers were in fact young Saudi men who looked like they were 20 years old. One such fellow kept slouching on the counter near me, even after the Saudia employee, in no uncertain terms, had told him to go stand in the line. He had a similar-aged friend with him who kept gesturing to him from the other side of the counter, inquiring whether he had succeeded in weaseling them onto their desired flight.

“You should go stand in the line just like the rest of us,” I told him in Arabic.

“But I need to get to Jeddah,” he replied, as if his needs trumped those of the other 95 people waiting in the line.

“Well I’m going to Jeddah too, and I’ve been standing in this line for two hours,” I replied.

“And what makes you so more special than all of us?!” I wanted to add, but didn’t in the name of maintaining the peace.

He eventually slunk away and I got my boarding pass for the 6 pm flight after I registered my name and waited a further 15 minutes on the side as the employee printed out the boarding passes for the many other passengers also going to Jeddah.

****
SAUDIA is perhaps the worst airline in the world in terms of seat management and yield rates for its fleet of many jets. Still controlled by the government, although they have been talking for years about privatizing the airline, Saudia keeps rows upon rows of seats empty on each flight in case a VIP official needs to travel at the last moment.

This of course means that the airline cannot predict with much accuracy how many empty seats it will have on each flight until around an hour or less before scheduled take-off. This leads to mass confusion at airports here, angry passengers who are told to wait for hours in front of airline counters, and some flights taking off with empty seats because irritated passengers just give up waiting for chance seats and leave the airport.

After I first bought my Jeddah-Riyadh-Jeddah business class ticket, I needed to be in court again so I decided to change my travel dates. This cannot be done online on Saudia’s website. This involved me going to one of their reservation centers and waiting more than an hour to be attended to by a reservations agent. When I was, the choice of flights I had was far from agreeable.

“There is this last seat in business class for this flight that leaves Jeddah at 115 am. Do you want it?” the reservations agent asked me excitedly.

Since there were no other choices for that day, I said “yes”.

When the plane took off from Jeddah, I counted at least ten empty seats in the business class section that I was sitting in.

Coming back I had to change to my flight again as my passport was not ready at the Brazilian embassy on the day I had intended to fly back. Now all the flights were full, and they could hardly get me on a waiting list. That is when my standing in the stand by line for two hours experience began.

Luckily, I arrived back in Jeddah at the civilized time of 9 pm. The only thing that irked me was that I was downgraded to economy, and I probably will never get the difference in airfare back from Saudia.

May 1 Update: Jonathan Pansacola, a consultant to Saudi Arabian Airlines, wrote to me after reading my post and said that the practice of passengers making multiple bookings and then not showing up for the flights or bothering to cancel them, is what really throws Saudia’s seating planning for a loop.
“In fairness to Saudia, yield management is especially difficult for the airline due to its passengers’ travel habits. Empty seats do occur on its flights but not because they are kept empty in case VIPs decide to travel (even VVIPs need to book beforehand or they just charter their own aircraft) but because as an airline it has one of the highest no-show factors,” said Pansacola.

“It is not uncommon for passengers in Saudi Arabia to make multiple bookings then change their minds without canceling. Saudia has lost billions of riyals due to no shows – this is why the airline has instituted a no-show penalty on its cheaper fares. It has also run educational campaigns on the importance of canceling bookings to give other passengers a chance to travel.” 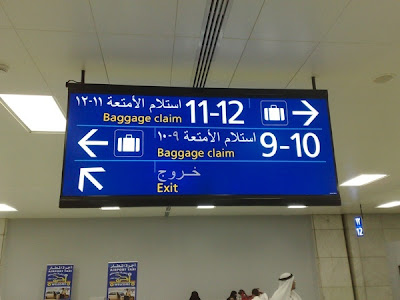