I seized the day with much salt! 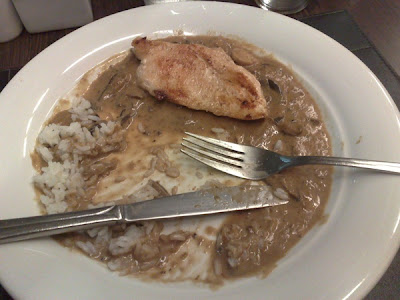 I MUST have swallowed a whole day’s worth of a human’s recommended daily consumption of salt in the single meal I ate last night at the Carpe Diem restaurant at Pier 21 in Brasilia.

The dish in question was chicken breasts in a creamy sauce with various types of mushrooms, accompanied by white rice. On the menu it sounded good: A sauce made with shitake mushrooms, champignons, and fresh mushrooms (that’s what it said in Portuguese, which sounded to me like they were just using various languages to describe several varieties of mushrooms). Two grilled chicken breasts were placed on top of the sauce and presented to me. From the first bite, my taste buds were overpowered by the saltiness of the sauce and chicken. I was hungry so I ate one of the breasts with sauce and rice. Then the waiter came by and asked if everything was okay.
“No,” I said. “The chicken is much too salty!”
The waiter took my plate and said he would tell the chef and change my chicken. After around 10 minutes I got a new plate of chicken and sauce, but it was still salty. I think the chef must have had the taste buds that detect savory flavors missing from his tongue, as the dish was still briny. Then the chef suddenly appeared at my table and asked me if the dish was better now.
“No, not really,” I said as I continued to eat it. After all I was hungry and this was the one day of the week when I allowed myself to go off my diet. I drank two ice-cold Mexican Sol beers to wash down all of that saltiness.
Lucikly, I had Haruki Murakami’s novel Sputnik Sweetheart to read while I ate and waited for my friend Ana Claudia to show up to watch Matt Damon’s new film The Informant with.
Share: