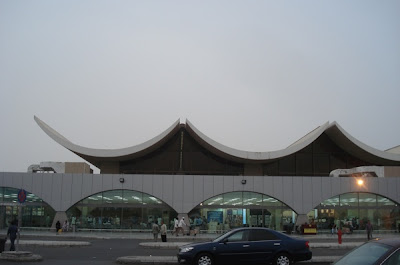 IT’S strange being back in Jeddah and just being a visitor after having lived here for 20 years. The city looks the same except for a few new malls and the many flyovers and underpasses that Jeddah Municipality is putting in at major intersections.

On my way to the airport tonight to catch a flight to Riyadh, I passed the huge Mall of Arabia, which is just a few hundred meters from the Saudia terminal. The mall’s soaring glass walls looked like an airport terminal to me, and would have looked great if they were part of King Abdul Aziz International Airport’s makeover.

The current airport is old by Gulf standards, nearly 30 years old, and is showing its age. It has long looked decrepit and been chaotic. Years of complaints by the flying public and top government officials fell on deaf ears, until suddenly at the end of 2007 a plan was implemented to improve the airport while a new terminal was being built.

I noticed the new signs in the North Terminal when I arrived from Dubai, and the Saudia terminal has been totally transformed into something that resembles a modern and efficient airport. The check-in counters have all been moved to the back of the terminal, new signage is visible everywhere, and the departure lounge area now looks airy and spacious.

The rehabilitation of Jeddah airport should have begun at least 10 years ago, if not sooner. The Bride of the Red Sea has been neglected long enough and now deserves to have a large amount of money spent on it to improve the roads, sewage, public transportation and airport.

Life in Saudi Arabia, with an estimated six million foreigners, and 17 million Saudis, unfortunately often involves much inter-ethnic tension. There always seems to be a Saudi man who thinks he can lord it over foreigners from developing countries. This happened to me and my Indian driver today when I went to a money changer to exchange some of my dollars for riyals. I went in and stood in line at one of the counters. My driver Muneer came in too and sat down on one of the many chairs to wait for me. Immediately, the Saudi security guard came up to him and asked him what he was doing.

“I’m waiting for my friend,” he said.

“No, you can’t stay here. Get out!” the security guard said in Arabic.

“Because that’s the new rule,” the guard replied.

Luckily for me I was wearing my thobe, so even though I don’t look very Saudi I had the required outfit in which to stand up to him.

After I changed my money and returned to the car with Muneer I apologized to him for the guard’s inexcusable behavior.

“That’s okay. I only stood up to him because you were with me,” he said. “I know it was my right to stay there.”

With that I fell silent, angry at the stupid security guard who thought he could bully my driver because he was Indian, and angry that such an establishment could employ such a bigot and idiot.