Living behind electrified fences in Brasilia 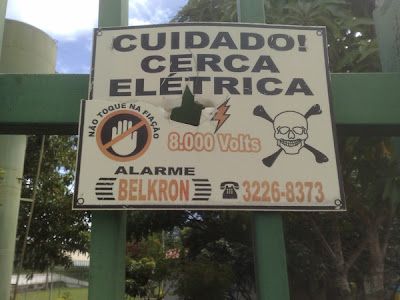 TWENTY years ago no one had them. Now practically every house in my Lago Sul neighborhood has them: Electrified wires at the top of fences carrying up to 8,000 volts each to deter thieves from breaking into them.

Brasilia has been suffering from a wave of criminality over the past few years. Part of this growth in crime can be blamed on demographics. The Distrito Federal, which encompasses the capital and all of its satellite cities and outlaying areas, has seen a boom in inhabitants. There are now more than 2 million people living in the Federal District, many of them poor people lured here by the country’s highest per capita income and hopes of striking it good by working hard or striking it rich through crime.

Sequestros relampagos, or lightning kidnappings, are sadly all too common in Brasilia. They occur usually when criminals overpower a person in their car, commandeering their vehicle and forcing the owner to come along for the ride. They usually steal whatever of value that they can find on that person, and often take them to an ATM and make them fork over their money.

A few weeks ago at a course I was taking I met a young and hip woman, a fellow journalist, whom I took an instant liking to. On the second day of the four-day course, I noticed that she wasn’t there and wondered where she was. She finally turned up at 10pm, only an hour before the end of that day’s session. She looked rather tired and harassed, but she smiled at me when I greeted her. What I didn’t know until the next day was that she had been a victim of a lightening kidnapping that night right in front of the building where our course was being held as she got out of her car.

“Two men suddenly appeared from either side and pointed guns at me,” recalled Rafaela as she later told the whole class about her ordeal. “They put me in the passenger seat and one of them sat in the back with a gun constantly poking into my waist.”

“I started crying and begged them to let me go. But they wouldn’t. We kept driving around and they even went to gas station and used my money to fill up,” she said. “They told me they were going to use my car in some hold-ups and then they would abandon it somewhere.”

“When they were tired of driving around they dropped me off and one of them had pity on me and even gave me R$5 so I could take a bus,” Rafaela explained.

They stole the R$200 (nearly $100) that she had in her wallet. Days after the crime, police had still not found her car.

Much of the crime in Brazil is fueled by the huge economic disparities between social classes. In the same day I can see the most expensive Mercedes and BMW cars on the streets of the capital, and then see barefoot children begging on the streets. The Lago Sul being the most upscale neighborhood of Brasilia means that the people here are threatened by this rising crime wave and feel they must protect themselves by having aggressive guard dogs and electrified fences that deliver 8,000 volt charges.

But the proliferation of cheap drugs, especially crack cocaine, is also responsible for the growing criminality. Just a few weeks ago a Bonnie and Clyde couple were finally arrested after stealing five cars in one night, killing one of the car owners, and wounding another. They had been stealing cars for nearly a year while high on crack. After driving them around, they would abandon them in an empty field on the outskirts of Brasilia and set then alight.

Many Brazilians are also upset with a justice system that they believe coddles criminals. The death penalty has been abolished and the most that a murderer can be imprisoned for is life, which usually means 30 years. Not only that, but prison officials regularly let out hardened criminals during the holidays to allow them to spend time with their families. Just this Saturday two such criminals let out for Easter were arrested in a satellite town after they robbed several stores and a car, and then rammed a police blockade set up to stop them. One of them was already in jail for three homicides! How can you let someone out like that and not expect him to drop immediately back into a life of crime? It’s what lots of Distrito Federal residents were asking themselves.

April 14 Update: My best friend from high school called me up yesterday as I was at my travel agent rebooking my flight to Saudi Arabia and told me that her house in Park Way (where I used to live until just two weeks ago) had been broken into during the Easter weekend while she and her family were away on a trip.
“They broke in through the back and stole everything! Two TVs, two computers, and some gold bracelets I had,” she told me. “And we have to wait until Wednesday for fingerprint experts to come and search for prints as there are only two of them for the whole Distrito Federal!”
In the meantime, she, her husband and her kids were not to touch anything until then. “The house is a mess, they opened all the drawers and threw everything around.”
The latest I heard from her later that afternoon was that the police were there again checking the scene of the crime. She told me that there was a possibility that convicts let out of the Papuda jail for the Easter holiday may have been responsible for the break-in and robbery.

Crime has gotten so bad in Brasilia that the local government recently ordered the arrest of 200 criminal suspects for questioning. That action does not seem to have stopped the crime wave. More police on the streets and tougher jail terms are probably the only things that will make a dent in this crime wave. Meanwhile, I understand why inhabitants of the Lago Sul hide behind electrified fences and ferocious guard dogs. 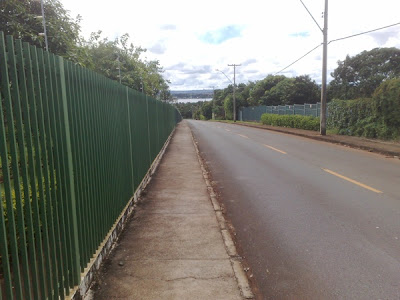