Many questions remain over death of Osama Bin Laden 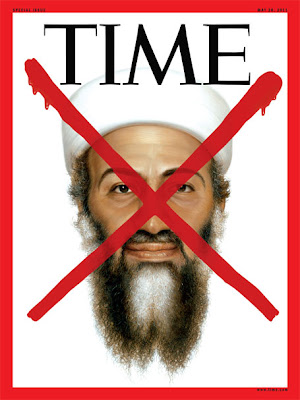 EARLY Monday morning I woke up to the fantastical news that the world’s most wanted terrorist, Osama Bin Laden, had been found and killed by US Special Forces in Pakistan. Not only that, but that his body had been flown to Afghanistan and then taken to the USS Carl Vinson warship in the north Arabian Sea where his body was buried at sea following the Islamic washing of his body and prayers.

Scenes of jubilant Americans at Ground Zero in New York and gathered outside the White House in Washington, DC, showed them chanting patriotic slogans and holding up signs that read, among other things, “USA 1, OBL 0”. I found this outbreak of patriotism rather distasteful but fully understandable given the 3,000 people killed in the Twin Towers and at the Pentagon when the jets hijacked by the Al-Qaeda terrorists slammed into them on Sept. 11, 2001. (Click here to read Egyptian-American writer Mona Eltahawy’s feelings at Ground Zero following OBL’s death. Click here to read Leon Wieseltier’s case for American joy at OBL’s death.)

Immediately the media began reporting that OBL had used his youngest wife as a human shield when the Navy Seals burst into his master bedroom on the third floor of a large house inside a fortified compound in the military-town of Abbotabad, just 50 miles north of the Pakistani capital of Islamabad. This later turned out to be false. What does seem to be true is that the US Special Forces flew in under the radar from their base in Afghanistan, landed just outside OBL’s compound and shot their way in a 40-minute gunfight. One of the three helicopters used in the raid was destroyed and left behind after it experienced a mechanical malfunction. 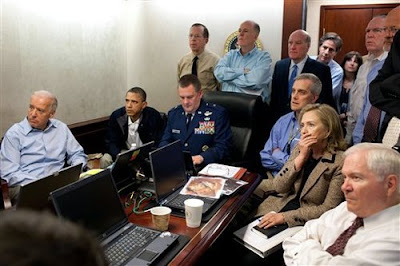 The White House then later released a dramatic photo (above) supposedly showing President Barack Obama, Vice President Joe Biden, Secretary of State Hillary Clinton and other officials watching a live video feed of the raid on OBL’s compound. Obama is frowning and Clinton is covering her mouth with her right hand as if in horror. It was as if real life were imitating an episode of “24”. This photo was later proved to be staged, as CIA chief Leon Panetta told the press that there was a 20-25 minute blackout in the live video feed from the raid in which he and others at the CIA waited anxiously in a windowless operations room at CIA headquarters in Langley, Virginia, waiting for news on the raid.

President Obama’s decision on Wednesday not to release any photos or video of the dead OBL, because the images were too gruesome and could incite further hatred and violence against the US and Americans in the Muslim world, of course immediately raised the suspicions of conspiracy theorists around the globe that perhaps OBL was not really dead or that he had actually died years ago. Indeed, it was reported as early as 2002 that he suffered from kidney failure and needed regular dialysis of his blood. In a strange interview that former Pakistani Prime Minister Benazir Bhutto gave to David Frost in 2007, only months before her brutal assassination, she claimed that OBL had been murdered in Pakistan by a Pakistani militant.

The most worrying aspect of this whole episode is the level of Pakistani involvement in concealing the presence of OBL in Pakistan for so long. Some accounts say that the Saudi terrorist had been living in that compound in Abbotabad since 2006, right under the noses of a nearby elite military academy and the many retired military officers who live in the area. The support of terrorist groups in Pakistan and of the Afghan Mujahideen by key elements in the Pakistani ISI intelligence services has been well known for years now. The US has provided Pakistan with $7 billion in military and economic aid over the past decade, and the US Congress is surely now going to try and cut back this aid following the discovery and death of OBL deep inside Pakistani territory.

The death of OBL of course does not mean the end of Al-Qaeda. Far from it, the terrorist organization has many cells and commanders. Saudi journalist Jamal Khashoggi, who knew OBL when he was fighting the Soviet occupiers of Afghanistan in the early 1980s, says that OBL had very little involvement in the daily running of the group’s terrorist actions, and that he functioned more as a charismatic figurehead and fundraiser. Yet it is also a fact that Al-Qaeda has lost much of its support in the Islamic world, especially following its bloody attacks in Saudi Arabia in 2004 and in Iraq. The wave of Arab revolutions this spring in Tunisia, Egypt, Libya, Bahrain and Syria, led mostly by non-militant youths, suggests that Al-Qaeda and its intolerant and religious ideology has been left behind.

The Republican hawks in the US, while being forced to admit that Obama did good in capturing and killing OBL (watching former Vice President Dick Cheney squirm on TV while praising Obama’s win was priceless!), are now trying to link the US success in Pakistan to the intelligence gathered by torturing terror suspects around the world and in Guantanamo Bay. John Woo, the former Justice Department under the Bush administration who gave the legal cover for waterboarding and other forceful methods of interrogation of terror suspects, wrote this week in the Wall Street Journal that the death of OBL at the hands of American forces was indeed due to US interrogation tactics that Obama no longer uses. I find that hard to believe, as it was the tracking of one of OBL’s couriers for several years that finally brought them to the 12-foot high walls of OBL’s compound in Abbotabad, and not torture.

Woo also claims that Obama specifically told his military commanders that OBL should not be captured alive as this would pose a problem in terms of where to hold him while he was being questioned. As Woo points out, Obama certainly did not want to have to place a captured OBL in Guantanamo Bay, and as the US found out, no country wanted OBL when he was dead, let alone alive.

The Obama administration has now admitted that some of the details they initially provided the press about the raid on OBL’s compound were wrong. Some Republican politicians in Washington have pointed out that administration officials should have said they didn’t know for sure when asked questions that they did not have sufficient information to answer correctly.

This whole affair leaves US-Pakistani relations in tatters, with American distrust of Pakistani intentions at a record high. Pakistani officials are now claiming that they have put their government in a difficult position by so openly supporting US military strikes against targets in Pakistan and Afghanistan. And indeed there is much anti-American sentiment in Pakistan, especially in the border areas near Afghanistan. The fact that the Obama administration has tripled the number of drone attacks on targets in Pakistan compared to under the Bush administration, according to Woo, surely does not boost the Pakistani government’s popularity in the more conservative and religious areas of the country.

Obama and the Pakistani government now have a very delicate task of moving forward without relenting on the war against Islamist terrorists, while at the same time winning minds and hearts in the Islamic world by convincing Muslims around the world that the war against terror is not a war against all Muslims but is just against those fanatics who are against the West and the freedoms of pluralistic societies. That has been and will continue to be the hard part.