Marriage With Cheating: The New Monogamy? 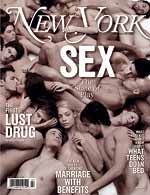 THE cover story of the November 21 issue of New York magazine is about “Sex: The State of Play.” The cover photo shows a pile of naked men and women, hugging and kissing each other. One of the articles in the cover package, “The New Rule of Cheating: Marriage With Benefits,” I found particularly interesting. The article is about the growing number of straight couples who have chosen to take a leaf from the love lives of gay couples, and admit that strict monogamy is not possible in long-term relationships, nor necessarily that healthy.
These couples are quoted as basically saying that they either allow each other to flirt with someone else, with some even allowing their partner to have sex with someone else! They say that as long as their partner loves only them, it is okay for them to have fun and play with other people.
To read the article online, click here.
Here are some of the various relationship variances as defined by New York magazine:

1. Above the waist rule: An agreement that any touching above the beltline is fair game.

2. Body-fluid monogamy: When a couple forgoes the latex with each other but requires it for all outside sexual activity.

3. Cheating: Secret, extracurricular romantic and/or sexual activity that breaks the rules. So nineties. So lame.

4. Closed relationship: How some people in open relationships refer to “old-fashioned” monogamy.

5. Don’t ask, don’t tell: A policy whereby people in a committed relationship may screw around, so long as they are discreet.

6. Fifty-mile rule: You don’t sleep with anyone who lives in your city.

7. Physical monogamy: You can look, fantasize, and engage in dirty talk — but no touching.

Since I tend to be jealous, I personally don’t believe in open relationships, though I do think that strict monogamy can be stifling for many people. Communication is the key for any healthy relationship. What do you think? Comments, please!