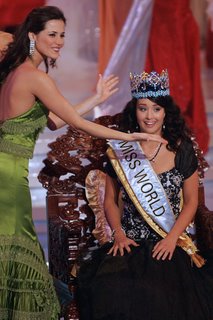 I WAS disappointed that Miss Iceland, Unnur Birna Vilhjalmsdottir, was crowned Miss World 2005 in Sanya, China today. I had been rooting for Miss Philippines, Carlene Aguillar, to win with her charming and stunning beauty. Even London bookmakers had placed the odds on her winning, according to Agence France Presse. Nevertheless, we can take comfort that she made it to the top 12.

Since I am in the office, I haven’t been able to watch the pageant, so I don’t know if Miss Iceland deserved to win, though she’s very pretty.

A Filipino colleague of mine quipped jokingly that it was okay for Miss Iceland to win, “as Iceland is melting away and they don’t have much time left to enjoy their country!”

Vilhjalmsdottir beat out a field of 102 young women from around the world and will serve as a goodwill ambassador and charity fundraiser for children’s causes throughout next year.

Trivia note: I personally watched the Miss World contestants practicing, including their organizer Julia Morley, in 1992 when they first held the pageant in South Africa, as I happened to also be staying the Lost City resort where they held the contest.