My interview with Cory Aquino 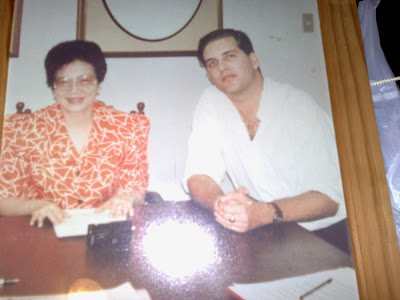 Former Philippine President Corazon Aquino and I
during my interview with her in Manila in 1993.

I WAS watching the news on the television Friday night in Brasilia with my mother when the anchor announced the death of former Philippine President Corazon Aquino at the age of 76.

“Oh my God! She died!” I said.
I had been following the news of her brave battle with colon cancer, and had been relying the news to my mom every few weeks. I guess we both knew that she would not last that long, especially after we learned that the cancer had spread to her liver. But when death arrives, it still surprises us even though we had been forewarned.
I had the chance to meet Aquino and interview her in Manila for Arab News in 1993. She had just stepped down from the presidency the year before, giving way to Fidel Ramos who had won the 1992 election. I arranged the interview through her spokeswoman Deedee Siytangco, and I met Aquino at the PLDT building in Makati, where she kept a private office.
Aquino came across to me as being a very serious and austere person in a Catholic sort of way. She answered all of my questions, but did not embellish any of her answers. I don’t remember all of my questions, but I do remember asking her about her daughter Kris, who was just then a rising star in show business. That was one of the rare times during our meeting that she laughed and cracked a smile. It was obvious to me that she deeply loved Kris no matter what problems she put her through.
The Philippines has lost a great hero. A woman who sacrificed much and had the courage to confront the Marcos dictatorship to end the brutality of a regime that had gone mad with power and corruption. She lost her husband, Senator Benigno Aquino, when he was shot dead on the tarmac of Manila airport when he returned to the Philippines from exile in the United States on August 21, 1983.
There are few people like Cory Aquino in Philippine politics today. From a very rich landowning family in Tarlac, she was above corruption and manipulation. Until recently, she helped lead a protest movement against the corruption in the Arroyo administration, a bright icon of moral decency for all decent Filipinos to follow.
No one will ever be able to replace her, but Filipinos should stop for a moment and honor one of their greatest stateswomen they have ever had!
Share: