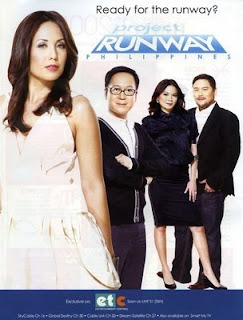 I have been a fan of the television reality show Project Runway since I first heard about it online and ordered the DVDs of the show from Amazon a few years ago. Hosted by the super-model Heidi Klum, I loved the whole concept of having various fashion designers compete against each other every week to see who could make the most fabulous frock or creative outfit.

Now, to my great joy, there is a Project Runway Philippines which debuted in the Philippines on July 30, 2008, on cable’s ETC Entertainment Central and on free TV through SBN 21. I only recently was able to watch the entire first episode on YouTube and liked what I saw.

This is in stark contrast to Jessica Zafra who said on her blog that she thought PRP “is the drab distant relative of the original series—the cousin from the province who gets sent to your house for summer vacation, doesn’t utter a word, acts like you’re about to push her down a well, and refuses to get on the escalator because it’s the devil. The show follows the series’ format, but it has all the excitement of homework. It’s no surprise that the production values can’t match those of the original—I assume budgetary constraints (But if the producer wasn’t prepared to spend spend spend, why bother getting the franchise?) and all the other logistical issues that are usually solved through the puede na method.”

I beg to disagree! I found the show to be a faithful reproduction of the American original. It was just as slick, just as well edited and the contestants just as interesting and varied in their talents, experience and ages. Jessica goes further and accuses the participants to be too buttoned-up and self-conscious. Once again I beg to disagree.

Hosted by the Filipino-American model and actress Teresa Herrera, PRP also has fashion designer and faculty member of the School of Fashion and the Arts Jojie Lloren as the mentor (playing Tim Gunn’s role), and Filipino model Apples Aberin-Sahdwani with top fashion designer Rajo Laurel as part of the judging panel. The winner of each season wins P500,000, a spread in Mega magazine, a start-up business package and the chance to show their collection in Philippine Fashion Week.

The first episode starts with all 14 contestants meeting at Manila’s Liwasang Bonifacio, where they are greeted by Herrera and meet Lloren. They are quickly plunged into their first challenge, after a drink of fresh coconut juice, in which they have to create a dress from material draped inside two jeepneys. The eldest contestant, Loida Hunter, is a 51-year-old dressmaker from San Pedro, Laguna, who ends up with only the leftovers after complaining that she wasn’t as fast as the other contestants in running to the jeepneys and snatching the fabrics because of her older age. No one befriends her, and it seems clear that she’s not going to make it. True enough, her uninspired dress made of green material gets the worst reviews during the runway show and she is eliminated.

I can’t wait to watch further episodes of PRP on YouTube. 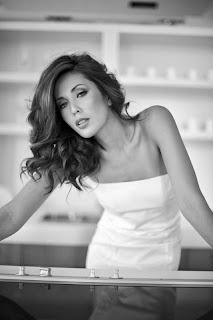