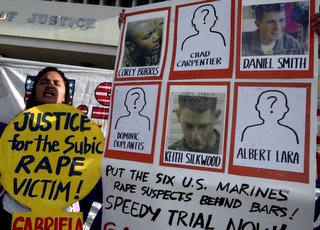 THE ALLEGED rape of the young Filipino woman several weeks ago by a group of drunken US Marines on R&R leave in Subic Bay has raised more questions than it has answered.
The main question in my mind is why would any woman in her right mind hook up with a group of six young and, let’s be honest here, horny soldiers in a bar of all places? After news of the rape broke out into the media, the woman’s family was at pains to insist that their daughter was of “boa familia” and was definitely not a prostitute. In fact, they rushed to emphasize that she’s a college graduate. Which just makes me wonder even more about what happened to her common sense that night when she agreed to join the Marines in their drinking spree?
Unfortunately, as we all know, a good education is no guarantee of having common sense, and in this case it is sadly doubly true.
The other troubling question is how this whole case is being exploited by the media, especially the tabloid newspapers, to whip up blind anti-Americanism. For sure the Visiting Forces Agreement, which the Philippines signed with the United States after the American pull-out from the Clark and Subic Bay military bases in 1992, heavily favors the United States. This is the case with all agreements the US signs with allies in terms of jurisdiction over American citizens who commit crimes on foreign soil while serving in the US military.
Nevertheless, as recent rape cases involving US servicemen in Japan and Korea have shown, the United States has a good track record of keeping the accused soldiers in the country where the crime was committed, and has punished those found guilty of committing rape.
This case has also served to polarize public opinion between the feminist camp, which views the woman in this case as a total victim who must find vindication at all costs in the courts of law and public opinion, and the skeptical camp that is probably mostly male, and which wonders why a woman who voluntarily offered herself to the six Americans is now complaining that they took advantage of her.
The legal teams of both sides is indicative of this split: The victim’s team is all female, headed by the high-profile Katrina Legarda, who appeared on ABS-CBN television’s “Pipol” program Wednesday night saying that the Marines didn’t have to rape the girl, as they could have paid a prostitute for a good time.
I was amazed when I heard that, as obviously the woman involved was not a professional lady of the night, but was still obviously sleazy enough to get blind drunk with the American soldiers and then even agree to go with them into their van, where they allegedly raped her as they drove around Subic.
The US Marines for their part, are being represented by an all-male team of older lawyers, many former diplomats who have served in Philippine embassies abroad, including the lead lawyer Raul Rabe, who served at the Philippine Embassy in Washington.
Some observers have commented that the woman claiming rape seems to just be after money that she could gain in some sort of settlement with the accused. I for one still feel unsure about many aspects of this case. It is just unfortunate that many in the media have decided to pre-judge the case before the accused have even had the chance to present their side of the story in a court of law.
Let’s judge this case in a court of law, and not be hasty and pre-judge it in the media.