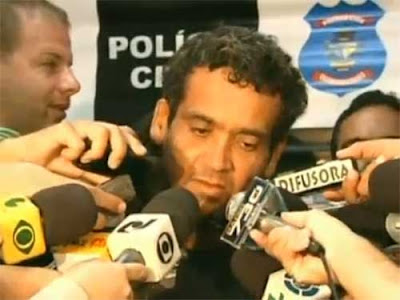 ALL OF Brazil was shocked last week when a 40-year-old mason confessed to the police in Luziânia, Goias, that he had killed six young teenagers after having sex with them over the course of a month from the end of December 2009 until January 2010.

Adimar Jesus da Silva was shown on television this week, in video filmed by Goias police, calmly pointing to the various places in the countryside just outside Luziânia where he had buried the corpses of each of his six victims. The banality and coldness of his expression left no doubt in the minds of many viewers that this man was indeed a monster with a sick mind.

But the fact that Adimar had previously been arrested in the Federal District in 2005 and sentenced to a ten-year jail term for sex crimes against two young boys, before being released early for “good behavior” in December 2009, is what enraged the mothers of the six victims and advocates for tougher criminal laws in Brazil.

Maria Jose Miranda, a public prosecutor, told the Correio Braziliense newspaper that Adimar’s early release from prison last year was the result of a sequence of errors, the main one being weak legislation. Under current Brazilian laws, there is no death penalty, not even for first-degree murder, and the most anyone can be imprisoned for is 30 years. Even so, most murderers never serve a complete life sentence, being allowed early release from imprisonment for good behavior after having served only 2/5 of their terms. Brazilian Congress is looking into changing the law so that those sentenced for committing serious crimes would have to serve at least 2/3 of their sentences before being eligible for early release because of good behavior. The electronic monitoring of those accused of sex crimes is also being considered.

The outgoing head of the Supreme Federal Court and the National Council of Justice, Gilmar Mendes, has been criticized for having vetoed a new law a few years ago that would have imposed tougher sentences for those found guilty of committing heinous crimes. Pedophile acts would have been included under that definition.

“If minister Gilmar Mendes had not voted for the unconstitutionality of the Heinous Crimes Act, Adimar would have been imprisoned until at least 2013. It’s easy now to blame lax judges for having freed him, but Adimar was freed because he fulfilled the legal requirements that Gilmar Mendes himself ruled were sufficient,” Miranda told the Correio.

Indeed, the Correio Braziliense did an investigation of Adimar’s case and found that although public prosecutors and doctors had several times told the court that the mason needed weekly psychiatric treatments and evaluations while in jail, their recommendations were ignored. This led to Adimar being examined by a doctor in May 2009, who subsequently wrote in her report that he did not appear to have any mental illness and that he did not need prescription medication. This despite an earlier psychiatric evaluation done more than a year earlier by three mental health professionals, that found Adimar showed signs of sadism and a sexual perversion that they concluded led him to find pleasure in the suffering of others.

Adimar was first arrested in 2005 after sexually abusing a boy of 11 and another aged 13 in the Federal District. He allegedly promised his victims money if they helped him in his work as a mason. In February 2006, after a trial, he was convicted to 15 years imprisonment for his sexual crimes. In September 2007, his lawyer managed upon appeal to have Adimar’s sentence shortened to ten years and ten months imprisonment.

Within one week of being released early from jail for “good behavior” in December 2009, Adimar had molested and killed his first victim in Luziânia. He told police that he killed all of his victims by beating them on their heads with shovels and rocks, after he had sex with them and felt revulsion for what he had done.

One critic of his early release pointed out that Adimar would have obviously shown “good behavior” while in jail since he was surrounded only by adults, and that there were no children there who could have tempted him into criminal acts.

As several defenders of the Brazilian justice system pointed out, no judge could have predicted that a sexual predator such as Adimar would have developed into a serial killer. Nevertheless, the mothers of the six murdered victims said they are planning to sue the Federal District court for having released Adimar early from jail without a proper psychiatric evaluation.

It remains to be seen now if the public outrage over the Adimar killings will provide enough momentum to get Brazilian criminal laws toughened or not.