Slumdog Millionaire a Hit in Brazil 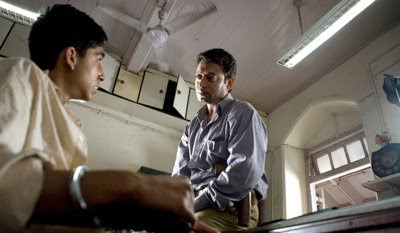 THE winner of 8 Oscar awards, Slumdog Millionaire, opened in Brazil on March 6, and it already seems to be a hit movie here.

I went to see it last night with friends, and the line to enter the theater stretched out of the lobby of the cinema and into the ParkShopping mall here in Brasilia.

I liked the film, especially the first half that showed the lives of two orphaned brothers, Jamal Malik (Ayush Mahesh Khedekar) and Salim (Azharuddin Mohamed Ismail), as they struggled to make a living after their Muslim mother is killed by rampaging Hindus in an inter-communal riot that destroys their slum in Mumbai.

Told in flashbacks by the grown Jamal Malik (Dev Patel) to a cruel police inspector (Irrfan Khan), who is interrogating him after he wins 10 million rupees on Who Wants to Be a Millionaire? to find out if he cheated, I found the younger Jamal Malik much more endearing and a better actor than his older self. Patel, who said in an interview on the Jon Stewart Show that it was his first time to go to India from the UK when he filmed Slumdog, seemed to have only one expression of fear and anger on his face during the whole film.

His whole love sub-text with Latika, played by Freida Pinto as an adult, was annoying and the most unbelievable part of the film.

Ankar Vikal as Maman, the creepy guy who picks up abandoned children with sweet talk and promises of food, only to maim them in order for them to bring in more money for him as beggars on the streets of Mumbai, should surely win a prize for the best villain of 2009.

Anil Kapoor, basically playing himself as they sleazy host of Who Wants to Be a Millionaire?, should also win a prize for being one of the pushiest stars in Bollywood. He was at the Oscar award ceremonies in Hollywood last month, where he kept preening for the cameras and even had to hog the microphone when Slumdog kept winning the most awards of the night.

The soundtrack of Slumdog is excellent and AR Rahman certainly deserves the two Oscars he won for best musical score and best song.

Brazilians are lapping up the film because there is a current craze here for all things Indian. The current eight o’clock telenovela on Globo Television here is called A Caminho das Indias (On the Way to India) which is set in both India and Brazil. The Indian scenes go to great lengths to explain the caste system in India, with one of the main characters being a Dalit or Untouchable who falls in love with a pretty rich girl from a Brahmin family. Many critics of the novela have complained that it presents a distorted and exaggerated picture of India, yet the Indian ambassador to Brazil was quoted by the Correio Braziliense newspaper as saying, rather diplomatically, that he didn’t mind the skewed view of India as he understood it was only fictional and that he was happy with the interest in India that the show was generating among Brazilians.

Interestingly, Slumdog may be having a similar effect on Brazilians. After the movie during the drive home the 16-year-old daughter of my friend said she liked the film but that in India it seemed like everyone was either super-wealthy or super-poor.

“There is no middle class in India,” said Gabby.

“Yes there is,” I replied. “It’s just that this movie didn’t show them at all.”

Still, if Slumdog gets Brazilians and others across the globe interested in Indian affairs, that is a small price to pay for something so good.