The book launch that didn’t quite happen 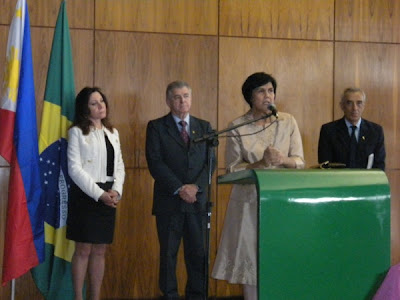 Philippine Ambassador to Brazil Teresita Barsana speaking at the swearing-in of the Brazil-Philippines Parliamentary Committee on Wednesday in Brasilia.

YESTERDAY afternoon my friend Ana Claudia and I eagerly arrived at the Brazilian Congress to attend the supposed launch of a book of photographs of the Philippines taken by Pierre Verger, a French photographer who ended up living and dying in Brazil, entitled Pierre Verger-1934-1937-1938: Filipinas.

Making our way to the Salão Nobre of the House of Deputies, I marveled at how easy it was to enter Congress, especially if one were dressed up the way we were. We went through one metal detector and that was it. We were in.

Since all of Brasilia was built in the late 1950s and early 1960s, the inside of the Congress building is modern in that 1950s sort of way. Just next door they have completely gutted the Palacio do Planalto, the presidential palace, in a much-needed reforma that is being overseen by the original architect of Brasilia Oscar Niemeyer, who at 101 years of age is still working despite recent health problems. This visionary capital is celebrating its 50th anniversary next April, and everyone is hoping that Niemeyer will make it.

But back to the supposed book launch. When we were finally seated in the rather smallish Salão Nobre, which is like the lobby of a slightly faded luxury hotel, Philippine Ambassador to Brazil Teresita Barsana announced that the actual launching of the Verger book would be on Nov. 4 at her official residence. Instead, we all witnessed the swearing in of the new members of the Brazil-Philippines Parliamentary Group. Deputy Nelson Marquezelli (PTB-Sao Paulo) is the head of this group, and he said that a group of Brazilian deputies are scheduled to visit the Philippines early next year.

From the huge floor-to-ceiling glass wall we had a lovely view of the grassy slopes in front of the Congress, where a large group of protesters had gathered and whom we heard screaming during our event.

After the swearing-in, Ana Claudia decided to take me on a walking tour of both houses of Congress. We saw a huge tiled wall in the lobby of the Senate made by the famous Athos Bulcão. There we saw a rather tall man in sunglasses wearing a jacket with a huge plastic sunflower stuck on it, smiling and posing for photographs with the public. He was obviously some celebrity, but I didn’t recognize him.

We watched him for a few minutes. “Do you want your picture taken with him?” she asked me.

The Brazilian Congress is famous for its various underground tunnels that link various parts of this large complex. Ana Claudia and I were looking for the especially futuristic looking one that has recessed lighting, that gives the completely carpeted tunnel an outer space sort of vibe.

When we finally found it in the House of Deputies, Ana Claudia told me it had always reminded her of something out of an episode of the TV series “Time Tunnel”. To mark our visit to Congress and the famous tunnel we took pictures of each other in the spooky glow of the underground passage that has moving sidewalks just like in airports. It was a suitably modernist end to our frustrating expedition in search of that book of photographs. 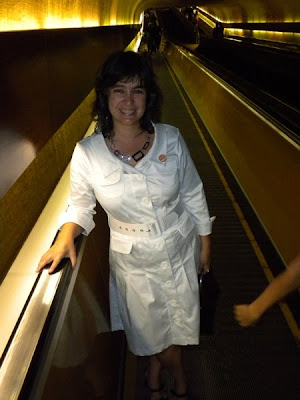 My friend Ana Claudia posing in the futuristic tunnel under
the House of Deputies.
Share: