The Boy in the Striped Pajamas Does Not Trivialize the Holocaust 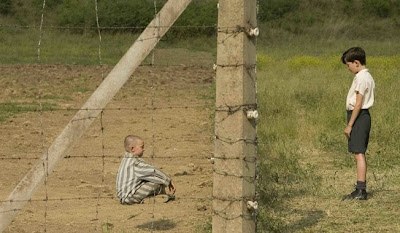 Jack Scanlon, left, and Asa Butterfield in a scene
from The Boy in the Striped Pajamas.

I WAS finally able to watch the film The Boy in the Striped Pajamas yesterday and was impressed by it.

Based on the novel of the same name by John Boyne, the film, directed by Mark Herman, is yet another take on what happened to the Jews in Germany at the hands of the Nazis during World War II. But this time, the story is told from the viewpoint of an eight-year-old German boy called Bruno, who is the son of a top Nazi official.

This alone has enraged some Jewish viewers in the US, who were offended that anything having to do with the extermination of six million Jews during the Holocaust could ever be explained through the eyes of the child of a Nazi.

Ron Rosenbaum, whom as I wrote earlier also hated The Reader for dealing with Nazi complicity in killing Jews in a nuanced way, and who admitted to not even seeing The Boy in the Stripped Pajamas, said Mark Weitzman of the Simon Wiesenthal Center had slammed The Boy in the Striped Pajamas for trying to stir sympathy in viewers for Bruno rather than for a Jewish character.

Manohla Dargis, a film critic for the New York Times whom I generally like, wrote one of the shortest and nastiest reviews of a film that I have ever seen, basically telling readers not to go see The Boy in the Striped Pajamas. “See the Holocaust trivialized, glossed over, kitsched up, commercially exploited and hijacked for a tragedy about a Nazi family. Better yet and in all sincerity: don’t,” wrote Dargis.

Was she pandering to the many Jewish readers of the Times? Who knows, but it seems to me that both she and Rosenbaum missed the whole point of the movie, which was to describe how awful and inhuman the Nazi concentration camps were. It does not in any way diminish or trivialize the suffering of the Jews. In fact, it highlights just how cruel, monstrous and cowardly many Germans were for either believing in Adolf Hilter’s ideology of hatred and genocide, or for being too weak to speak out against it.

In any event, Asa Butterfield who plays Bruno in the film, is an excellent actor. He conveyed the wide-eyed innocence of a child not yet corrupted by state ideology or the hatreds of adults. Vera Farmiga is also excellent as Bruno’s mother who initially does not know about the crematoriums at the concentration camp that they move near too in the countryside when her husband becomes its commander. She is disgusted and angered when she finds out the truth, and demands that she and her children (Bruno and his older sister) be sent away to live with relatives far from the camp.

Poor Bruno in his innocence at first believes that the camp is a farm when he catches a glimpse of it from his bedroom window. He is forbidden from playing at the back of the house, for fear that he may stray near the camp. This of course makes him more curious and he eventually manages to sneak out to the camp and befriends a Jewish boy named Shmuel (Jack Scanlon), who just happens to be the same age as him.

They talk almost every day through the barbed wire fence. At one point, Bruno asks Shmuel if he is proud of his father, and he replies that yes he is. When Shmuel asks him Bruno the same question, the protagonist hesitates for a few seconds before answering in the affirmative.

Bruno’s innocence is further encouraged when he sneaks glimpses of a Nazi propaganda film about concentration camps that his father screens in their home for fellow officers. The film, done in documentary style, is in reality a complete lie about the camps. “And here at the café they enjoy delicious and nutritious meals, after spending the day doing handicrafts or tending to their gardens,” intones the narrator cheerfully while smiley prisoners are shown going about their business. It’s as if the prisoners were at a vacation resort rather than a forced labor camp where they were starved, beaten and gassed to death on a regular basis.

The harrowing end of the movie has Bruno digging his way into the camp to help Shmuel look for his missing father, who most likely has been killed by the Nazis. Shmuel finds an extra striped uniform for Bruno to wear, and off the two go further into the camp to look for the Jewish boy’s father.

Just then the guards round up all the prisoners in the section that Bruno and Shmuel are in for a bath. Of course, this was a euphemism used by the Nazis so as not to panic the prisoners. Innocently agreeing to be herded into a special building for showers, the prisoners are ordered to strip naked. Bruno holds Shmuel’s hand as the crowd of adult prisoners press in around them and the lights are switched off. High above their heads, a German guard with a gas mask on opens a hatch and drops in the gas pellets that will kill all the prisoners below.

Bruno’s parents meanwhile realize that he is missing and go running like mad towards the fence of the camp until they find his clothes near the hole he dug. Bruno’s father rushes into the camp and screams at the guards to stop the mass execution, but it is too late. Bruno and hundreds of Jewish prisoners are all dead in the name of Nazi hatred and sick German efficiency.

Does the film trivialize the Holocaust? Certainly not. If anything it highlights the ugliness and inhumanity of the Nazis. Rosenbaum should watch the movie.