Vintage Cupcakes in Brasilia Could Be Better 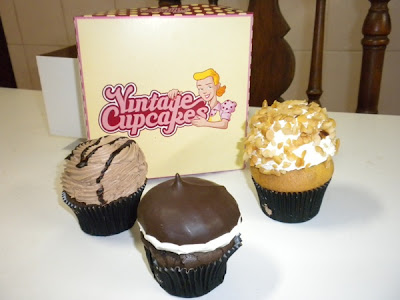 IT SURE didn’t take that long for the current rage of cupcakes in the US to reach Brazil.

I first read about the opening of Vintage Cupcakes in Brasilia a few weeks ago in an article in the Correio Braziliense. According to the paper, Gustavo and Ana Lacerda, a Brazilian couple who had lived in the US, decided to open a string of stands selling traditional American cupcakes in a variety of flavors. Their first stand is now open in the Patio Brasil shopping center on W3 Norte.
I’d been meaning to swing by and try them out, and yesterday after having lunch with my friend Alisson, I had the chance to. Their tiny stand is located on the top floor of the shopping center near the Leitura bookshop and in front of the Banco do Brasil.
Each cupcake is sold for R$6.00 (around $3), which is rather pricey for Brazil. But each cupcake is quite large, and each one comes piled high with a mound of icing, which you can see from my pictures. The problem is that the frosting is not velvety smooth and buttery, but rather tastes like it is made from vegetable shortening such as Crisco!
I bought four cupcakes to try: A chocolate and marshmallow one, a Nutella and banana one, a dark chocolate one and a Macadamia nut one.
Several Brazilian bloggers have raved about them on their blogs in Portuguese, click here and here, but then I’ve found that Brazilians tend to gush about many things and are extremely generous in their praise!
The saleswoman told me that they are baked fresh every day in a kitchen in Aguas Claras. The kitchen was set up at cost of R$200,000 ($100,000) according to the Correio, and the couple plan to open three more stands in Brasilia before allowing their concept to be franchised in other parts of the country.
The cupcakes I bought did not taste very fresh, tasting possibly at least a day old.
I miss the yummy cupcakes that I’ve tasted in New York and Washington, and wish they could be duplicated here. Is that too much to ask, or are Brazilian taste buds that different from ours? 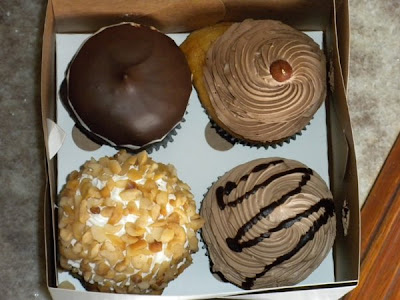