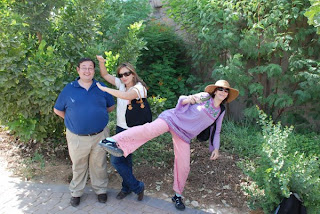 Hani, Rym and Rasha ham it up, kung-fu style, for me at Al Ain Zoo.

YESTERDAY, on the first day of Eid-al-Fitr, I drove to the oasis town of Al Ain with four friends. Only 150-kilometers from Abu Dhabi, Al Ain is a charming town on the border of Oman.

It’s name, which literally means “The Spring” in Arabic, is in reference to the many underground water springs in the area. Called the Buraimi Oasis, this area as been continuously inhabited for more than 4,000 years and is the birthplace of the UAE’s first president the late Sheikh Zayed bin Sultan Al Nahyan.

The highway to Al Ain is lined with palm trees and other trees, and the town itself is known as the Garden City of the UAE because of its many trees and green areas.

We first visited the zoo (Dh15 entrance fee for each adult), and we were certainly not alone in thinking that a day out at the zoo would be a fun way to spend the first day of Eid. The place was packed with hordes of young Indian and Pakistani labourers, who were clearly enjoying their time off work. But their large numbers was off-putting for everyone else, especially families, who had to jostle with them to get good views of many of the animals who were hiding in their enclosures.

The worst part was in the Nocturnal House exhibit which had glassed in enclosures in a building for animals that prefer the night such as Arabian Cats and owls. The labourers began making animal noises as soon as we walked into the exhibit and one banged loudly on the glass of the owl’s enclosure. I was so annoyed by such immature and boorish behavior that I rushed out of the exhibit and waited for my friends to come out. There were security guards in the house, but they didn’t lift a finger to stop the rowdy behaviour that was clearly stressing out the poor animals.

I usually don’t like zoos and this was no exception. Most of the animals were hiding in their enclosures from the afternoon heat and the crowds of Eid visitors who kept pointing at them, shouting and taking pictures of them. If I were one of these animals, I’m sure I would hide too! 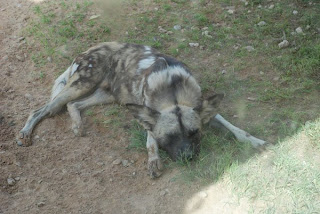 After two hours of walking around in the heat at the zoo we had more than enough of the crowds and decided to visit the nearby mountain called Jebel Hafeet. At 1,340 meters, it is the highest point in the area. We drove to the top and had a snack and drinks at the Mercure hotel. According to reports, authorities are planning to cover the entire mountain and turn it into a ski resort with artificial snow. We all agreed that this was hare-brained idea, one that was not bound to attract very many people. 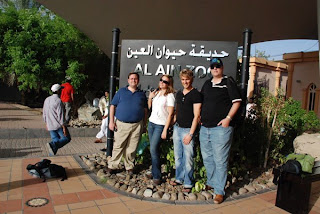 Hani, Rym, Constantine and I at the entrance to Al Ain Zoo.