Water, Water, Where Art Thou? 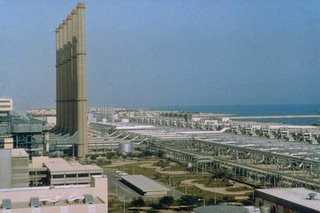 IN Saudi Arabia water is so scarce that it costs much more to buy a gallon of potable water than a gallon of gasoline. And that shouldn’t be a surprise to anyone who knows that Saudi Arabia sits atop massive reserves of that sticky substance dubbed black gold, and that most of the country is one huge desert.

Residents here in Jeddah have always suffered from chronic water shortages, but the area I live in, called Baghdadiah Gharbiah, has been especially hard-hit over the past year. We were used to only getting piped-in water from the municipality a few days a week, which usually meant not having water in our pipes 24-hours a day. That I could live with, as long as I knew that water would be coming out of my shower head and taps during certain times of the day.

But then the periods of water shortage became longer and longer. I complained to my genial landlord, Dr. S, who is a dermatologist, and he suggested I build a huge metal water tank in my second bathroom. “That way you’ll never run out of water,” he quipped.

I balked at the idea of having to install an enormous tank that would take up a lot of the ceiling space in the bathroom. (You see, I’m 6’4” in height and hate having to crouch down.)

I began buying drinking water, at SR3 a gallon, from little delivery trucks that came by every few days, to fill up my huge, plastic drums which I use to store water in.
In the meantime, Dr. S was buying truckloads of water from the Tahlia Street water plant, at around SR150 a pop. The problem was that the trucked in water once pumped up to our building’s water storage tanks would only last an hour before running dry. “What the hell were my neighbors doing with their water?!” I thought.

Obviously, being mostly Indian and Filipino, and used to massive amounts of rainfall and water back home, they were taking baths three times a day, and washing their clothes every two seconds. And my Egyptian neighbors, used to everything being massively subsidized by their government back home, expected unlimited, free water courtesy of the Saudi government.

As the acute water shortage stretched into months, Dr. S visited his friends at the Ministry of Agriculture and Water to find out why we weren’t even getting our weekly quota of municipality desalinated water. It turns out a massive water pipe that brings water from a main road down to our area had burst, and the government was not going to fix it until February!

In the meantime, cheeky and shameless government officials suggested to Dr. S that he pay out of his own pocket to have the new pipes installed if he didn’t want to wait for the government to do it. Estimated cost? A cool SR3 million! They even had the nerve to further suggest that if Dr. S found it too expensive, he could ask the owners of other buildings in our area to chip in! How ridiculous! Where in the world does the government ask, even jokingly, that a private citizen pay for some work that is clearly the responsibility of the government?! Only in the Magic Kingdom. But don’t think that this acute water shortage affects only my neighborhood. All throughout Jeddah you can see water tanker trucks rumbling through the streets delivering water to parched buildings.

Most of the water consumed in Saudi Arabia is from massive desalination plants built on the Red Sea and Gulf coasts. Here in Jeddah we have a huge desal plant, and 200 kilometers south of here in Shuaiba, we have another huge desalination plant (the biggest in the world I think), which is being expanded as I write this.
Still, all this extra capacity is only a drop in the ocean and hardly seems to make a dent in the ever-growing demand for water. It pays to live in a posh area where you have royals as neighbors. The higher the royal, the less likely it is that water will be cut off to that area.

Unfortunately for me, there are no royals that I know of living in my neighborhood, so I have to suffer water shortages along with everyone else here. I now spend an average of SR60 on clean water a week. How I miss the rains of the Philippines and Brazil!

And now the Saudi government has decided to privatize the desalination and supply of water. Until recently, the government massively subsidized the cost of water. So much so that owners of apartment buildings sometimes only paid the government around $10 a year for their water! Obviously, the days of practically free water are well over, and as the Kingdom enters the WTO, Saudis are going to feel the shock of globalization.