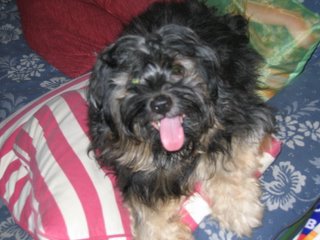 A minor incident at work the other day involving some hair shed by my beloved dog Nog-Nog, made me realize why dogs are often better companions that our fellow human beings.
Noggy is a tiny, loving and affectionate terrier, who weighs a mere 7 kilos and who has been with me for the past four years. He faithfully barks at the front door of my apartment whenever he hears someone outside in the hallway, and doesn’t like my driver Muneer, who has a mortal fear of all dogs after having been bitten by one as a child in Kerala.
Anyway, I was quietly sitting at my desk editing some stories when the office boy (who is hardly a boy in age, but then what do you call the office peon?) walked by me and plucked something off my back. As I turned my head to the side to see what he had dislodged from my shirt, I saw a clump of fine and fluffy black hair, which was unmistakably Noggy’s.
“What’s that?” asked office boy.
“Oh, it’s my dog’s hair,” I said.
“Yuck, now I’m going to have to wash my hand seven times before I can pray again…” mumbled our Muslim office boy.
What nonsense, I thought to myself. I have heard that same line countless times before from my own father, who with age seems to be regressing into less tolerance.
“I’m mad at you!” I glowered at office boy. “Leave me alone!”
My father has repeatedly told me that the angels won’t enter my home since I have a dog, but I told him that was nonsense as God created dogs, and being such close and loyal friends of us humans, how could angels object to them?
Perhaps the angels appear in cat-form, which would account for their lack of love for all things canine?
But back to the Muslim and Saudi dislike of dogs. Unlike in France and the US, where dogs are beloved pets and full-fledged members of their adoptive human families, dogs here in Saudi are shunned because they are believed to be religiously “unclean”. Whatever that means.
Most dog imports are banned into the Kingdom, unless the owner can convince the authorities at the airport that their dog is going to be used as a guard hound, and not as a spoiled lap-dog that provides limitless affection to its owner and who licks it’s owner’s face everyday.
Luckily for me, Noggy was born here, so he didn’t have to contend with narrow-minded immigration bureaucrats before I took him into my home and adopted him as my own.
He sleeps on the bed with me, often competing for pillow space. When I watch TV, he sits next to me on the sofa and lets me rub his stomach as he sleeps on his back.
The love I feel for him is not understood by people like office boy, who think animals should be shouted at and kept outdoors. If only all people loved dogs as much as I do, the world would be a much better place.