Why Obama’s trip to Brazil was a success 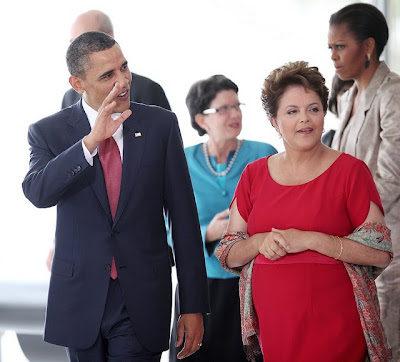 US President Barak Obama and Brazilian President Dilma Rousseff in Brasilia
on March 19, 2011. (All photos copyright the US Embassy in Brasilia)

US President Barak Obama’s first official trip to Brazil this past week was a resounding success because most Brazilians love all things American, but more importantly because Obama is the first American president of African descent.

Brazil is a melting pot of ethnicities, with a much higher level of intermarriage between the races than in the United States. And that despite the fact that Brazil was the last country in the West to abolish slavery in 1888!

Unfortunately, Obama did not once mention his blackness in Brazil, perhaps because, as this American commentator wrote here, he’s afraid of the right-wing backlash that would accuse him of favoring ‘black’ Americans over white ones if he did. It is indeed sad that the president felt restrained from fully reveling in all of the joy and pride that Brazilians felt in seeing him everywhere he went in Brasilia and Rio de Janeiro. A 46-year-old businessman in Rio told the New York Times that Obama was “an inspiration”.

Rousseff looked nervous in this her first hosting of a head of state after her swearing in as president on Jan. 1. Obama, an old pro, smiled warmly and waved at everybody. The difference in body language between the two was noticeable. 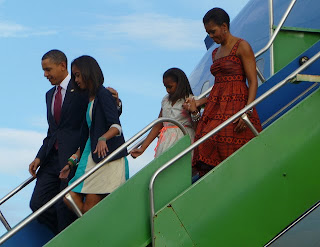 The first lady Michelle Obama as usual was noted for her at times dubious fashion choices, such as when she stepped off Air Force One at the Brasilia air base wearing what looked a red and black, sleeveless cotton dress. It looked like she was going to a picnic and not arriving on an official visit! Later she redeemed herself wearing a cream-colored tailleur to the presidential palace, and then later removing the jacket to reveal a one-shoulder top when she went to watch Brazilian students perform capoeira.

President Obama was distracted by the beginning of the coalition air strikes in Libya, which he announced officially in a televised broadcast from Brasilia last Saturday. This caused most major Brazilian newspapers to headline the next day: “Obama launches Libya attacks from Brazil”.

What is really important about Obama’s visit to Brazil, is that it marks a new chapter in US-Brazil relations which had reached a low point last year when then Brazilian President Luis Inacio “Lula” da Silva instructed his ambassador at the UN to vote against further sanctions against Iran. This infuriated the US, which already was not happy with Lula’s close relationship with Iranian President Mahmoud Ahmadinejad and his support of the Castro brothers in Cuba.

President Rousseff immediately began to distance herself from some of Lula’s policies last year by publicly criticizing the mistreatment of women in Iran and sending signals to Washington that she wanted a new start to their relationship.

Lula was invited to the official luncheon that President Rousseff held for Obama last Saturday at the Brazilian Foreign Ministry, but did not attend claiming a prior engagement, which was probably best for all concerned. For while there are still many disagreements between Brazil and the US, especially on trade and tariff issues, both presidents seem intent on building a better relationship than the one left by their predecessors.