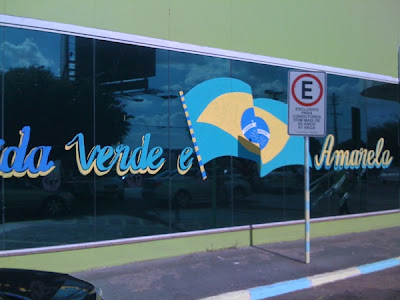 Even my local supermarket has succumbed to World Cup fever….

WEEKS ago roadside sellers had gobs of the green and yellow Brazilian flags for sale. At first I couldn’t figure out why this sudden burst of verde e amarelo patriotism was taking place. I was used to seeing huge American flags everywhere in the US, but here in Brazil? Then I realized that it was for the upcoming World Cup.

Brazilians are mad about football, beer, curvy women and partying. The World Cup unites two of those passions: football and drinking beer while watching the games. This country is so mad about football, or futebol in Portuguese, that all banks and most shops will close half an hour before a game played by the Brazilian team, and only reopen half an hour after the game ends. Since this World Cup is being held in South Africa, most of Brazil’s games in the first half of the championship will be held at 11:30 am and 3:30 pm local time, wrecking complete havoc on regular business hours and any semblance of productivity.

“It’s going to be like working around prayer times in Saudi,” my mother quipped today when I was moaning to her about the whacky store timings we are going to be subjected to during the World Cup.

The Correio Braziliense newspaper on Sunday said that many companies were setting up large screen televisions in offices and stores so that their employees could watch all of the Brazil games in comfort. Some companies even went further and said they will be providing snacks and refreshments to their workers, with one advertising agency in Sao Paulo even saying it would provide beer for its workers to drink! Employees were warned in the article not to overdo the beer at work, and to refrain from swearing at the TV screen too much as this might affect their reputation.

I usually like watching the World Cup, which is the only time really when I have any interest in football. But the over-enthusiasm of Brazilians vis-à-vis the World Cup is giving me second thoughts about the world championship of football that is held every four years. Businesses of all types are wrapping themselves in Brazilian flags and nationalism to cash-in on this mania. My local supermarket has painted a huge Brazilian flag on its wall (see photo), M&M’s are being sold in green and yellow, and some pet shops are even painting dogs in the colors of the Brazilian flag.

Luckily I am not the only person in Brazil who isn’t gung-ho on the World Cup. My partner Thiago told me that this hyper-nationalism was sickening. “I can’t stand all these Brazilian flags on everything! I hope Brazil loses the World Cup!” 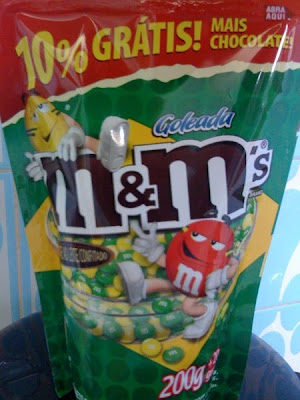