A tale of two pets: Blackito and Penny 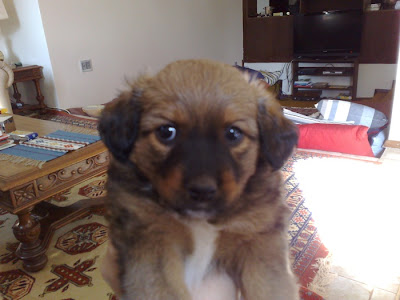 AROUND two weeks ago I told my mom she should get a cat to deal with the small field mice that were digging holes all over our property.

"My friend Camille says her cat eats all of their mice," I said to my mother.

Within a few days our driver, Ali Omar, appeared with a stray, black kitten. He had huge ears and a spunky disposition. Even our dog Nog-Nog liked him. I decided to call him 'Blackito'. He liked me and would curl up on my arm and purr while we watched TV at night. Then I decided we should take him to the vet for a check-up.

Little did I know that the veterinary clinic that we took him to was where he had been originally taken from by our driver when he brought him to us. There we found his mother and siblings lounging around a glassed-in room, abandoned cats waiting to be adopted for free. Well, not exactly for free.

The vet looked at 'Blackito' and when we asked her what the dry spots on his head were, she said: "Oh, that's scabies."

"Is it contagious?" my mom asked.

"Yes it is, and you should be extra careful with your delicate skin as you can get it too," the vet told my mom.

My mother in her old age has found her skin has become especially thin and delicate, easily bruised and cut. The thought of getting scabies from the cat was just too much for her, and so Blackito's fate was sealed.

"You can leave him with us for a week and we will treat him if you buy us the medicine," the vet said smiling angelically at us.

We readily agreed and went off to the pharmacy to buy the human medication that the vet said was okay to use on Blackito. Little did we know that this medicine cost $93 for a box of only 15 pills! And the vet said he needed to be treated for a whole month, at one pill a day!

Horrified at the high price, and angry that the clinic had not warned our driver that Blackito had scabies or that the medicine was so expensive, we felt cheated and lied to. We finally decided to buy one box of the pills and gave it to the clinic for Blackito's treatment. This cat sadly wasn't coming home with us again.

Fast forward around ten days and I found myself stopping at the same veterinary clinic to check up on Blackito. He looked better and was still being treated in isolation for his scabies. But I still didn't feel that pull one feels when one falls in love with an animal. Instead, my eyes were on a litter of puppies that the vets told us had just been dumped that very same morning in front of the clinic.

One of the puppies, a fluffy female, especially caught my eye and I asked about her.

"What breed is she?"

"Not that big, sort of like a small poodle," she answered. "You can take her home for a week and see if you like her."

That sealed it. I scooped her up in my hand and off we went.

"Look what I brought home!" I announced brightly to my mom as soon as I got home, proudly holding up my new puppy. "Isn't she a doll?"

And my mother agreed. We've called her Penny. Nog-Nog is rather jealous of her, growling at her if she gets too close to him, but we're hoping he'll loosen up and warm up to her once he realizes that we won't neglect him for the newcomer.

Penny cried the whole first night in my house, probably because it was her first time ever away from her mother, according to my mom. She's only two months old and already has razor-sharp teeth. She plays with us now and runs after us in the garden, her chubby figure bouncing around behind us.

Although we've only had her a few days, last night she hardly cried and was quiet until around 6 a.m., which is when I usually wake up anyway. I'm just glad that Blackito led us to Penny in a strange but loving way.

Nog-Nog wearing his sweater as we watch TV at night: 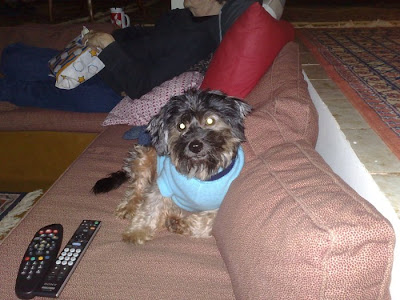