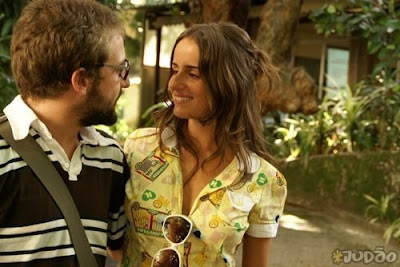 Gregorio Duvivier and Erika Mader in a scene from Apenas o Fim.

I WENT to see the new independent Brazilian movie Apenas o Fim (Only the End) last weekend with my friend Ricky after reading a long profile about the film's director Matheus Souza in the Correio Braziliense.

Souza, who was born and grew up in Brasilia, is a film student at the Pontifical Catholic University in Rio de Janeiro (PUC-Rio) and Apenas o Fim is his first feature-length film. Filmed entirely on the green and leafy campus of PUC, the movie is about the last hour in the relationship of a young student couple played by Erika Mader and Gregorio Duvivier.

Upbeat, funny, rather neurotic, and full of references to pop culture, Apenas o Fim is a breath of fresh air in Brazilian cinema that usually churns out silly comedies or totally-depressing films about violent drug gangs living in favelas.

Souza follows the couple walk around the campus while talking and reminiscing about their relationship. Duvivier reminded me of an over-talkative but lovable character from a Woody Allen movie, while Mader with her reluctance to tell her boyfriend why she is leaving him or where she is going, was both mysterious and likable in a kooky sort of way.

"Were you never happy with me?" asks Duvivier at one point.

"No, I never was completely happy," replies Mader.

"Will you be happy after you leave me?" he asks.

"Then why don't you just stay with me?" he pleads.

Only two other characters appear on screen with the couple, both fellow students that they run across on the campus. Both exchanges are hilarious and add some much needed humor to stop the film from becoming an over-indulgent piece of navel-gazing.

The director Souza said that he spent his childhood weekends with his divorced father watching 10 movies that they would rent. "My father never talked much," Souza told the Correio. "Watching movies together was how we communicated."

There are plenty of references to famous movies in Apenas o Fim, including a film-within-the film that is not pulled off well at all and should have been left behind on the floor of the editing room.

Nevertheless, Souza certainly seems to have the beginning of a great career in filmmaking. Go see Apenas o Fim if you'd like to see what educated, twenty-something Brazilians are like.

I like indie movies, but the only Brazilian productions I've seen were City of God and the series City of Men.

Lets see if I can find this at an indie film festival around me.