I’M so excited by the new bag I bought myself last Sunday, that I’ve decided to write about it.Last week I suddenly realized that I was sick of my trusty Diesel messenger bag, made of nylon, and which I had been using on a daily basis for the past two years. Have a look here it is:

So suddenly, I decided that I had to buy a new bag NOW, and not some cheap nylon bag either, but rather a classy, leather bag that I would be proud to be seen with.“You should be willing to spend a little more for something you’re going to use everyday,” was the sage advice of my office fashion guru Sara.“Yes, but I want something fashionable. It’s so hard to find anything decent for men,” I moaned.And that is so true. Designers seem to think that the only thing men can stand when it comes to bags are plain, boring briefcases, in only black or brown. Why should only women have fun with bags? It just wasn’t fair.So, off I went on Saturday to look for a Puma bag (that Sara said were cool-looking). Luckily, I didn’t find any, as I’m sure they would have been plasticky and too colorful. Suitable for a 16-year-old, but not for a 40-year-old journalist. As they say, 40 is the new 30, but with money.Next, I tried Diesel again, but they only had a hideous, unstructured leather bag that cost more than SR700 ($186) and looked like it could be bought on the street in India for 10 rupees…. you get what I mean, right?!On Sunday night, determined to get a new bag, I set off with my mom and hit the Al-Khayyat center on Tahlia Street, that BusinessWeek magazine in a pique of creativity dubbed the “Fifth Avenue of Jeddah” a few years ago in an article on Saudi Arabia.Louis Vuitton, Donna Karan, Christian Dior, Dolce & Gabbana all have shops there. I skipped the LV shop as I didn’t want to spend $1,000 on a bag. Instead we stopped at the Rubaiyat store which stocks Prada and D&G. Well, the Prada bags for men were horrendous. They were black and looked like this: 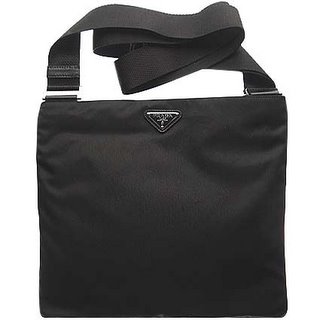 Not only that, they looked cheap and nasty, and probably cost 5 cents to make in China. Their price tag of nearly a $1,000 made my mother laugh out loud at the stupidity of anyone who would buy such a bag.The D&G bags were trendier, but were also plasticky and cost an arm and a leg. I say, okay, pay an arm and a leg if you really like a bag, but at least make sure it’s leather and will last more than a week.Finally we arrived in the Donna Karan shop and I immediately saw the bag that I fell in love with: 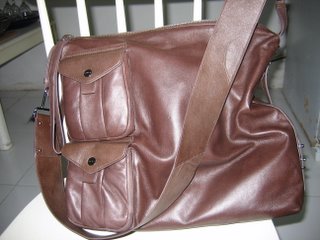 Available in rich, velvety soft black or brown leather, I chose the brown one for looking nicer. My mother agreed with my choice and I handed over my debit card to pay for the SR1,099 bag ($293).I must confess that I’ve never paid so much for a bag before, and I’m still getting used to its incredible softness, but it’s been worth every penny so far!