Brasilia agog at brutal murder of top lawyer and wife 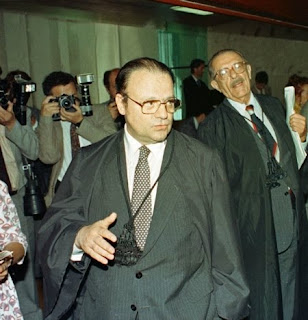 THE BRUTAL murder of a former judge of the Superior Election Court, Jose Guilherme Villela (seen at right), 73, his wife, Maria Carvalho Villela Mendes, 69, and their maid of 30 years, Francisca Nascimento da Silva, 58, on August 28 has left Brasilia residents atwitter.

The boyfriend of their granddaughter found their bodies on Monday, August 31, in their top floor apartment in 113 Sul. They had been savagely stabbed multiple times, a total of 72 stab wounds among the three victims according to investigators. The police said there were no signs of a break-in, and that all doors leading into the apartment were found locked on that day. This led investigators to believe that the murderer (or murderers) was known to the couple and maid. Following a forensic examination of the apartment and the bodies, police said they believed the couple and their maid had been killed on the evening of Friday, August 28.

113 Sul is considered a posh address in Brasilia. The superquadra is home to three current ministers in the government of Brazilian President Luis Inacio Lula da Silva, including one who lives in the Villelas’ building.

Investigators first cast suspicion on the son of one of the many domestic employees of the Villelas, who had run into trouble with the law a few years ago and had been defended in court by Mr. Villela himself. Mrs. Villela reportedly had a large jewelry collection that she kept at home, and police said all of it was missing following the murders. The press initially reported eyewitnesses allegedly having seen a man trying to sell pieces of the jewelry in a satellite city of Brasilia, but no arrests were made. Crucially, dollars kept by the couple in the apartment were not taken.

Globo TV reported that although the Villela’s building had security cameras installed in strategic points, they were not hooked up to any recording device, thus denying police crucial evidence of who had been in and out of the building on that fatal day. Investigators did find surveillance footage from a neighboring building showing two men with backpacks running away from the Villela’s building on Friday evening, but the video quality was not good enough to identify any of the men. After residents and security guards told police they had not noticed any strange people in the area on the day of the crime, investigators put out a public appeal for anyone with information or video footage of the area to come forward. No one has done so yet.

The Correio Braziliense newspaper early on reported that the police made a crucial mistake of leaving the Villela’s apartment unguarded for two days following the discovery of the bodies, and that several relatives went into the apartment to recover various documents. Now, police investigators are saying that close family members are the main suspects in what may have been a murder-for-hire scheme.

The murdered couple’s son, daughter, and granddaughter have been called in several times for questioning, with the daughter being subjected to one round of exceptionally long questioning on Friday that lasted at least 6 to 8 hours.

Reporters have been mobbing chief police inspector Martha Vargas, who is in charge of the investigation. TV crews have been daily filming her arriving at the 1st Delegacia de Policia every morning, as well as every time she and forensic investigators have returned to the Villela’s apartment to look for more clues. According to the Correio she has been to the apartment ten times already. She has (rightly so) resolutely refused to discuss the ongoing investigation with the press, but leaks from within the police department have been giving crucial clues to the press.

A 15-cm knife found at the scene of the crime was initially thought to have been the weapon used to kill them, but police sources now say that the knife may have been planted at the crime scene to throw investigators off. They also claim the only fingerprints found at the apartment belonged to the Villelas, their maid and close relatives. Investigators were also puzzled by the lack of large amounts of blood at the crime scene, which they would normally expect to find after such a brutal triple murder.

Stumped investigators have looked at the financial records of the Villela couple to try and see if they could have been murdered for their wealth. Crucially, investigators allegedly found that Mr. Villela had recently taken out a large life insurance policy in his name. Police did not say who the beneficiaries were. O Globo newspaper also reported that Mr. Villela had recently won an important case in the Supreme Court here and was being paid 12 installments of R$7 million ($3.88 million) each. Two installments had already been deposited into his bank account.

With no eyewitnesses and no video surveillance footage to help them, police investigators are waiting for forensic laboratory test results which are due to be ready on Monday, September 14, to help them find out who killed the Villelas and their maid and why.

UPDATE: Globo TV this week reported that the autopsy report of all three victims in this gruesome murder said that none of them had defense wounds on their hands or arms, suggesting that they had been drugged before being stabbed to death. Toxicology tests done on their blood found no signs of drugging, so investigators believe that they could have been knocked out by ether, which would have evaporated in the more than two days it took to discover their bodies in the apartment, meaning no trace of the knock-out chemical substance would have been found at the scene of the crime.