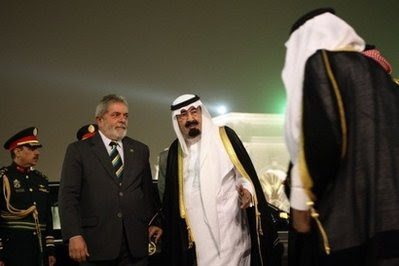 BRAZILIAN President Luis Inacio 'Lula' da Silva arrived in Riyadh yesterday afternoon on the first ever official visit of a Brazilian president to Saudi Arabia. Accompanying him are his wife, the foreign minister, the minister of commerce and a delegation of 50 businessmen.

Saudi Arabia is Brazil's biggest trading partner in the Middle East, with bilateral trade standing at around $5.5 billion a year. Brazil imports oil from the kingdom, while Saudi Arabia imports airplanes, chicken and other foodstuffs from Brazil. The kingdom is looking into the possibility of buying farms in Brazil to provide rice, fruits and vegetables for the country.

The Saudi English-language press has been running stories about Lula's visit, but nothing very scintillating. I checked the Brazilian press too, and did not find much except for this delightful picture gallery of President Lula in Riyadh. Click here to see him arriving with his wife in Riyadh, and a picture of her meeting King Abdullah.

President Lula will be attending a breakfast this morning hosted by the head of the Saudi Arabian General Investment Authority. The kingdom is trying to get more Brazilian companies to invest in the four new economic cities that are being built here at a cost of $60 billion. These cities are expected to generate 1.3 million jobs. According to BBC Brasil (in Portuguese), several Brazilian contractors have already expressed interest in providing catering services for the thousands of workers helping to build the new cities.

The Brazilian president leaves Riyadh tonight enroute to China and Turkey, after which he returns to Brazil.