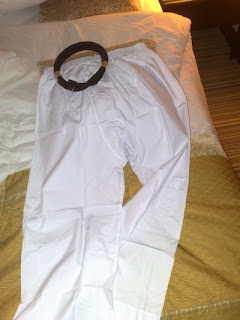 I AM in Jeddah, Saudi Arabia, to sort out my father’s things and do other bureaucratic tasks at government offices. At midday today I went to the Civil Affairs department where one goes to register births and deaths. It was prayer time so we had to wait until it was over to talk to someone inside.

“They’re not going to accept your papers,” said my friend Hazem. “They only accept papers in the morning. You will have to return tomorrow.”

And Hazem was right. I entered the ground floor of the building and there was no one to be seen. The waiting area was empty and the counters were unmanned. We asked someone where to go to register deaths, and he said “upstairs.” There we found several civil servants working behind desks, but none of them wanted to part with much information, and one man kept telling us to go ask someone else a little bit further down. We were finally told to speak to the “mudeer” or head of the section. We knocked on his door and could see through the partition that no one was inside. Just then he arrived, and sat behind his desk, shuffling papers. When we asked him questions he said, “look at the sign on the wall. All the requirements are listed there.”

“But my father died in Brazil,” I protested, showing him my father’s death certificate from the Brazilian authorities and from the Saudi embassy in Brasilia. He looked at them and said that they would do, that I should come back the next morning.

This evening I walked to the Jamjoom Center, a huge office and shopping complex near my hotel in the Al-Hamra district of Jeddah. Built in the 1980s, it at one point claimed to be the largest commercial building in Saudi Arabia. Much bigger and nicer shopping malls were built since then, but at the time shopping at the Jamjoom Center was the fashionable thing to do.

I was looking for a pair of long, loose, white pajama-like pants (called sirwal in Arabic) that one wears here under the thobe so that one’s underwear and legs are not immodestly visible through the thobe.

I immediately found a friendly-looking Saudi man selling such items in a small booth. I bought a pair of sirwal and an extra-large igaal (the braided black hoops that one places on one’s head to hold the headscarf in place). The total price: SR65 ($17). Usually I would have bargained a little and asked for a discount, but the mall was so empty and many of the shopkeepers looked forlorn and depressed, that I decided that now wasn’t the time to be asking for discounts.

My aunt told me on Friday that the famous gold shops of Jeddah are empty, even though owners have put up signs offering 60% to 70% discounts on their jewelry. Consumers are just not buying right now, and many shop owners have had to let go of some of their salesmen during this economic slump.

The Jamjoom Center is also suffering from the fact that the Carrefour supermarket that used to be there has closed after a commercial dispute with the owners of the building. Without the lure of a major supermarket to reel customers in, the mall has seen a drop in shoppers who prefer to shop elsewhere. The dispute is now allegedly being resolved in a court of law.