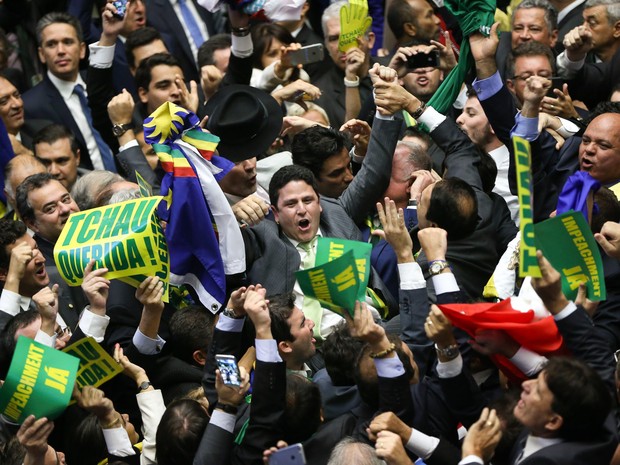 UPDATE: The Chamber of Deputies, the lower house of the Brazilian Congress, voted 367-137 to impeach Brazilian President Dilma Rousseff on Sunday, April 18, 2016.

The impeachment motion now goes to the Senate, which should decide whether to accept or not by May 10. If they do, President Dilma will be immediately suspended as president for a maximum of 180 days. The Senate will then have to vote on the measure.

Brazilians are experiencing unprecedented political tension as the impeachment process against President Dilma Rousseff moves swiftly ahead. On Thursday, the Supreme Court met in a special session for eight hours to hear the government’s petition to have the impeachment stopped. The court in the end voted 8-2 to allow the process to go forward.

Speeches for and against the impeachment started being given in the lower house of Congress, the Chamber of Deputies, on Friday morning. They are scheduled to run in a marathon session until Sunday morning, with only a few breaks late at night to give the 513 congressmen a chance to sleep. On Sunday, the deputies will start voting on the impeachment. If Dilma is impeached by the lower house, she will be suspended as president for 180 days, during which the Senate will have to debate and vote on the motion. Vice-president Michel Temer, who is the son of Lebanese immigrants, will immediately assume the presidency as soon as the lower house votes in favor of the impeachment. If he does make it, he will be Brazil’s first ever president of Arab descent.

According to polls taken by all the major newspapers, Dilma will lose the vote in the House of Deputies and in the Senate too. She seems to realize that she is on the way out, but in interviews this past week has vowed to fight to the last minute. The Folha de Sao Paulo counted 338 votes in favor of her impeachment in the lower house, with 123 votes against the motion, and 52 lawmakers still undecided. For the motion to pass they would need 342 votes. In the Senate, out of a total of 81 senators, the paper counts 44 senators in favor of impeachment, 19 against and 18 undecided. For the motion to pass only 41 votes are needed.

The whole impeachment process has sharply divided Brazilians along ideological lines. Poorer Brazilians and leftist intellectuals have remained strong supporters of President Dilma and her Workers’ Party, though most will not deny that she has not handled the economy well at all. Middle class and wealthier Brazilians have been leading the massive protests against the president and her party, calling on her to be impeached or for her resignation.

Both pro- and anti-impeachment groups have called for huge rallies on Sunday across the nation. Fearing that violence may break out between the opposing groups, the governor of the Federal District ordered that a 2-meter high metal be installed in the Esplanade of the Ministries, a grassy mall that runs from the central bus station to Congress in the center of Brasilia, with all of the ministries ranged on either side of the mall.

The wall is one-kilometer long and has already been dubbed the “Berlin Wall” and the “Wall of Shame” of Brasilia by locals upset at seeing their public space so sharply divided. The federal minister of justice called it a “crazy idea” in a television interview. Some observers have said they fear that violence may break out between the Movimento dos Sem Terra (Movement for the Landless) activists and the pro-impeachment crowd. The MST members are known for using violent tactics in their protests, burning tires and throwing dangerous objects at riot police.

The polarization of Brazilian society caused by this political debate has become so severe that even a Brazilian doctor recently announced she could no longer the treat the child of a Workers’ Party activist because she could not stand the ruling party. The local doctors union defended the doctor’s decision, saying she should be proud of what she did, pointing out that no doctor is obliged to provide medical treatment to someone they did not like unless it is an emergency or they were the only doctor in the area.

In the meantime, Vice President Temer has been busy having meetings with groups of politicians, all eager to get an appointment in the new government they see coming soon. President Dilma has been decimated by the departure of the PMDB party from her ruling coalition, as well as that of a slew of smaller parties, and is trying to put on a brave face by visiting the camps of her ardent supporters who have traveled to Brasilia to protest for her on Sunday.

She has been looking very tired and run down in her public appearances. A major newsweekly magazine ran a particularly unflattering cover story claiming that the president was losing her mind because of all of the stress she has been under. Her defenders slammed the publication, claiming the article was sexist and mean-spirited. But the president has long had a reputation for being a tough woman who does suffer fools easily, and who regularly blows up and shouts at her ministers and staff members during meetings.

Supporters of the government call this impeachment a “coup attempt,” and many observers have pointed out that some of the congressmen voting for the impeachment have committed worse crimes than the president has. President Dilma has been accused of mismanaging government spending accounts by using creative accounting methods to hide the growing deficit.

We will have to wait and see if Temer as president will be able to turn around the Brazilian economy, which is going through one of its worst recessions in 100 years.