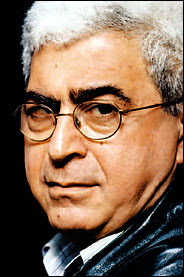 The Lebanese novelist and journalist Elias Khoury gave a talk on the art of the novel here in Abu Dhabi on Tuesday as the first event of the inaugural season of New York University Abu Dhabi Institute’s fall 2008 lecture series.

The NYU Abu Dhabi Institute is the research hub and community outreach arm of NYU’s Abu Dhabi campus, which is scheduled to open in September 2010, according to Mariet Westermann, NYU's vice chancellor for regional campus development. It is starting to hold lectures from this month to make its presence felt in Abu Dhabi and to interact with the local community.

Held in the posh Al Mamoura auditorium of the Aldar Properties building just off Muroor Road, Khoury’s talk was an intimate conversation with the faculty director of NYU Abu Dhabi Institute Philip Kennedy about how he writes and the problems he’s faced.

Kennedy’s long-winded introduction was felt by some to be excessively fawning and yawn inducing. But for myself and others who had never read anything by Khoury it was educational.

Born in 1948 in Beirut, Khoury travelled to Jordan in 1967 at the age of 19 and visited a Palestinian refugee camp which would leave a lasting impression upon the writer. His outrage at what he encountered pushed him to join the Fatah faction of the Palestine Liberation Organization and remain in Jordan until 1970 when Palestinian guerilla forces were crushed by King Hussein in the Black September offensive.

Fleeing to Paris, Khoury continued his studies there. Upon returning to Beirut he joined the PLO’s research center, working with leading Palestinian intellectuals such as Hisham Sharabi and the poet Mahmoud Darwish. When the Lebanese civil war broke out in 1975, Khoury took part in it and was seriously injured, temporarily losing his eyesight.

The Palestinian experience of being forced out of Palestine by Jewish settlers in the Nakba (Catastrophe) of 1948 has been a major theme of many of Khoury’s novel especially Bab al Shams (Gate of the Sun) which he wrote in 1981. Translated into English in 2005, this book gained him critical acclaim in Britain and the US for its lyrical style and unconventional use of multiple viewpoints.

Another colleague of mine who also attended the lecture, and had just finished reading Bab al Shams in English, said it was a difficult book to read because of the shifting narratives. “But eventually it all came together and I could see how the different stories had something in common,” she said.

Khoury said that writing a new book was always difficult for him as he always feels like he needs to relearn how to write whenever he starts work on a new book. He also said that the truth can never be found in the recollection of an event by a single person, but rather in the varied recollections of many people.****

NYU Abu Dhabi Institute’s Fall 2008 lecture series continues with a discussion of Stephen Hawking’s A Briefer History of Time by NYU Professor Glennys Farrar on November 12 at 6 pm (also at the Al Mamoura auditorium); a look at the results of the US elections on Nov. 16 at 6 pm with NYU’s Rogan Kersh, who is associate dean and professor and public policy, and Robert Shrum, political strategist, and finally Marina Warner discussing Edward Said on December 17 at 6 pm.

For a complete schedule of the lecture series, click here.

To read Elias Khoury's appreciation of his friend and poet the late Mahmoud Darwish, that appeared in The National on Aug. 29, 2008, click here.

Hi! I've read some of your articles in different publications.


I hope many countries with conflicts involving Muslims will air the hit Canadian sitcom "Little Mosque on the Prairie". The show best exemplifies Canada's position as the definitive quintessence in today's world of multiculturalism/ pluralism.


Here are the links:


Little Mosque on the Prairie
http://en.wikipedia.org/wiki/Little_Mosque_on_the_Prairie


List of Little Mosque on the Prairie episodes
http://en.wikipedia.org/wiki/List_of_Little_Mosque_on_the_Prairie_episodes