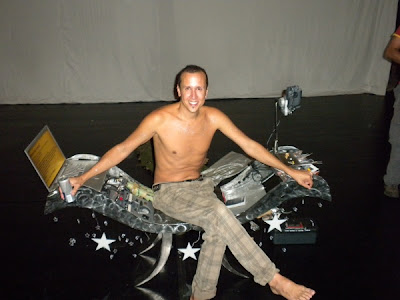 Ricky Seabra exhausted but happy after his show

on Saturday night in Rio.

RICKY Seabra's obsession with the significance of the American flag is very evident in his show "Empire, Love to Love You, Baby". He is not alone in his obsession. Millions of other Americans are equally obsessed with the Stars and Stripes. The difference is that Ricky casts a critical eye on this worship of a symbol of American patriotism, something many of his compatriots have not been able to do, especially in the aftermath of the Sept. 11 attacks on the US in 2001.

Using endless video clips showing crowds and celebrities singing the American national anthem The Star-Spangled Banner at public sports events, Ricky dissects the words of the first stanza only of the anthem. The anthem has four stanzas, but is mostly sung with only the first three stanzas.

Ricky claims that after The Star-Spangled Banner was made the country's official anthem on March 3, 1931, the question marks in the song were removed after World War II in a bid to boost American patriotism and remove any doubts as to America's power and destiny to be a global superpower.

Of course, by then the US had already had an empire for 48 years with the Philippines that it won from Spain following the Spanish-American War in 1898. Independence was granted to the Philippines in 1946 after the end of World War II, but the American Empire was to remain in Asia (the Vietnam war from 1959 to 1975, US military bases in the Philippines, Japan and South Korea) and the Middle East (Gulf War and the 2003 invasion of Iraq) for decades to come.

Ricky shows through hilarious video clips, such as the one that shows the correct way to fold an American flag, and recounting childhood incidents such as when his Washington, DC, elementary school flag had to be burned when it fell down from the flag pole and touched the ground, how the American obsession with its national symbol of freedom and democracy often obscures the much darker side and consequences of having an American empire.

Ultimately, Ricky's critical dissection of exaggerated American nationalism is a critique of American power abroad that ends with flashes of slogans on the screen saying "US Out of Iraq!". Since his show was put together when Bush was still in power, the subsequent election of Barack Obama to the White House, and the pullback of US troops from Iraqi cities, makes his criticism seem a little dated, though not at all less valid.

-- 'Empire, Love to Love You, Baby' has just ended a two-week engagement at the Funarte's Cacilda Becker Theater in Rio de Janeiro. He will be next performing it in Parana and in Belo Horizonte. Check his website for updates on the actual dates.