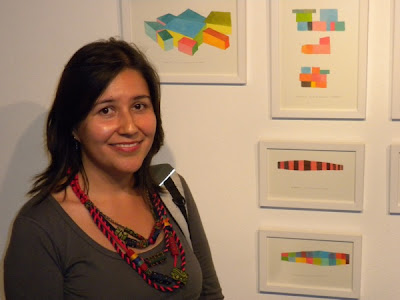 explore the geometry of various public buildings in Brasilia.

LAST week I attended four art exhibitions in one night in Brasilia. I had originally intended to just see Yana Tamayo’s solo show, but when I arrived at the Galeria CAL of the Casa da Cultura da America Latina in the Setor Commercial Sul, friends I met there told me there was another show upstairs and more at the Caixa Economica.

Tamayo’s show reminded me of senior art shows one sees in universities. She is still young, only 31, and the show was co-sponsored by the University of Brasilia, so that may account for the sense of a talent still not fully developed that I felt she was.

Entitled Projeto Desvio de Serie (para olhar a cidade), Tamayo told me that her aim here was to look at Brasilia’s architecture and public spaces with new eyes, and show that in her art work. One of my favorites was her video installation that showed a speeded up 19-minute long video of a green public space with a road in the background on which cars drove by. The movement of the cars and the moving shadow cast by overhead clouds looked cool to me, reminding me of TV police series in which detectives watch video surveillance tapes to catch a criminal.

She also did a series of small watercolors in which she reduced popular buildings, such as the Conjunto Nacional shopping center and the Olho do Tatu underpass at the Central Bus Station, to blocks of geometric color. Her Y-shaped water towers of Ceilandia reminded me of the water towers of Riyadh and Kuwait.

Her show is open until July 19 in the Quadra 4, Edificio Anapolis.

The second show that I saw that night upstairs from Tamayo’s was by a much older artist, Marlene Godoy. Her work is abstract and consists of huge panels of all types of melted waxes that she layers into different designs. I didn’t really like her work: For me it looked like institutional art that would look best in a corporate boardroom or the lobby of a five-star hotel.

Moving on to the Caixa Cutural, which is the large exhibition space next to the headquarters of the Caixa Economica bank at the end of L-2 Sul in the Setor Bancario, I saw two exhibitions: One of the drawings of the great Franco-Swiss architect Le Corbusier, the other of the Austrian pop artist Friedensreich Hundertwasser.

I enjoyed Le Corbusier’s architectural drawings immensely, especially those of the public buildings he designed and had built in Chandigarh, India, in the early 1950s. From his masterful use of raw, unfinished concrete, that he used in so many of his buildings, it is easy to see how he was such a great influence on the Brazilian architect Oscar Niemeyer and urban planner Lucio Costa when they were designing and building Brasilia in the late 1950s.

Hundertwasser’s exhibition showcased his posters that he had painted to celebrate the Universal Declaration of Human Rights. I must admit that I enjoyed the poetry written by the Brazilian Thiago Mello to accompany the artwork, more than the art itself!

Both the Le Corbusier and Hundertwasser shows are on display until July 19. 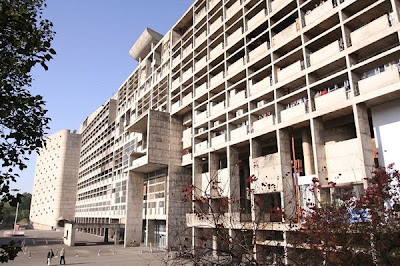