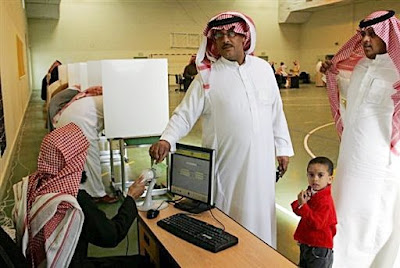 THE surprising announcement on May 18 by the Saudi government that the second round of municipal elections, due to be held in October of this year, were being delayed for two years was disappointing and discouraging.

The timing of the announcement was awful: The day after four women were elected to the Kuwait Parliament for the first time ever. This provided fodder for the usual Saudi bashers, such as Egyptian writer Mona Eltahawey, who likes to whine about how awful the kingdom is, and feels she is an expert on the country because she lived in Jeddah for a few years while growing up and was forced to ride in women’s section at the back of public buses.

In a recent Op-Ed piece for the New York Times, Eltahawey wrote that the women winning in Kuwait was what scared the Saudi leadership into postponing the municipal elections for two years.

I’m sorry to burst her bubble, but the Saudi bureaucracy is hardly that organized or quick on its feet to be able to react to such news so fast! In typical Saudi fashion, no regard was given to how such an announcement of the delay in elections would seem to the whole world coming so soon on the heels of the Kuwait outcome.

The official reason given for postponing the elections was so that they could be improved and expanded. The word ‘improved’ does not mean much to me as it can mean many different things. But ‘expanded’ carries many positive possibilities such as making all of the 14 seats on each of the 178 municipal councils up for election (currently only half are elected, the other half appointed by the government), or the inclusion of women on the councils, something that Saudi women have been asking for since 2004.

It has also unfortunately become fashionable to bash the councils for being allegedly useless and a waste of time. “By the accounts of several activists, those local councils are useless,” writes Eltahawey. But when was the last time that she was in Saudi Arabia or spoke to any municipal council member about their work?

From the interviews I have had with the elected head of the Jeddah Municipal Council in the past, I can say that my hometown council has been able to achieve many of its objectives. The major one that I saw with my own eyes just last month is the masterplan to build a ring road around the whole city and the addition of dozens of overpasses and underpasses at all major intersections in order to alleviate bottlenecks and make traffic flow smoother in the whole city. Of course, since the project is around halfway done, there is still major construction going on, which in some cases severely slows down traffic as cars and trucks are squeezed through narrow thoroughfares. But one can clearly see that by the end of next year, Jeddah’s overall traffic flow will be fantastically improved.

I was looking forward to the 2nd round of municipal elections as a way to assess what these councils have done well, and where their performances could be improved. Isn’t that the whole purpose of democracy is to begin with? Those who performed poorly could be voted out of office, and those who did well and wanted to continue their work could be re-elected.

What frustrates me the most is the way the Saudi government is so opaque and seemingly arbitrary in many of its decisions. Why wasn’t a public dialogue started about the performance of the councils? Delaying the new elections for two years without any good explanation just makes it seem like they are afraid of holding them again. The whole point of elections are that they are held regularly without fail and are never postponed for any reason barring a catastrophic event such as a massive earthquake, outbreak of the plague or nuclear war!

And don’t tell me that the elections were postponed because of the religious conservatives. Most of the municipal posts up for grabs were won by Islamists in 2005, so I don’t think they would oppose new elections.

The Jeddah Council regularly holds meetings with the public that any citizen can attend and talk to members of the council. So they really cannot be accused of being out of touch with popular sentiment. Yet even so, many Saudis seem to hold a grudge against the councils for not having introduced sweeping social changes. But this is I suspect a projection of their frustrations at the seemingly glacial pace at which change is taking place.

Blogger Ahmed al-Omran is one of them. In an Op-Ed piece for the New York Times today on the occasion of US President Barack Obama’s first visit ever to the kingdom to hold talks with King Abdullah, he wrote: “The masses will not listen to Mr. Obama unless he also addresses the leaders who deny us basic rights. He must signal to them his intention to change the longstanding policy of turning a blind eye to the undemocratic practices of America’s Arab allies. We don’t need any more nice words. Our government likes to talk about reform, but the glacial pace of change leaves young people like myself hopeless and frustrated. My friends and I always talk about leaving the country. We want to live in a place where we can be ourselves.

“I still keep the paper from my first (and so far the last) elections with the word ‘Voted’ stamped in blue ink on it. That ink has started to fade, just like my hopes for change.”

To that I say, don’t give up hope! Municipal councils are supposed to deal with mundane issues such as traffic, giving building permits and regulating local commerce. Their role is not to start a social revolution or to make decisions that can only be made by the king and his council of ministers.

Of course I would love to see women running for municipal councils and elections for at least half of the seats on Shoura Council. All of these are doable and attainable in our lifetimes. We just have to keep pressing for them and never give up. I think much of the seeming opposition to social change in Saudi Arabia comes from inertia and outdated customs. As long as reformers couch their push for change as being within Islamically-acceptable terms, there should not be much the rulers can do to stop change. Sure they can try to delay and attempt to derail it, but if we keep pressing ahead and never stop asking for our rights, then we will eventually see the change that so many of us Saudis hope and yearn for.