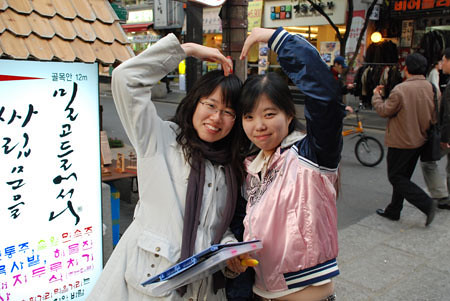 I'M currently in Seoul, South Korea, on a trip sponsored by Samsung Electronics. They invited a group of journalists from the Middle East and Africa to visit their design centers for electronics. I'm representing Saudi, there's Christopher from Kenya, Arash from Iran (who left tonight back to Tehran), several Syrians from Dubai, an Algerian and a Lebanese guy.

Samsung is the biggest company here, responsible for 47% of all of South Korea's exports. It is involved in most everything from electronics, ship building, mobile phones, and even book publishing. It also owns the five-star Shilla Hotel in Seoul where we are staying.

Samsung is continuing to be buffeted by a huge corruption scandal in which a former lawyer for the firm is claiming that the company ran hundreds of slush funds opened in the name of its employees in order to pay off tax inspectors and ministry officials. He admits to have personally helped run these funds and of having handed over money himself to government officials. Prosecutors have now opened an official investigation into the allegations.

Samsung has denied all of the charges, asking for any proof to be shown in public. The whistle-blower failed to show internal Samsung documents that he had promised to show at a press conference on Monday showing the bribery took place. It will be interesting to see how Samsung gets itself out of these corruption allegations. If the whistle-blower turns up some real internal memos from Samsung, the company is going to have a hard time denying it.

I will be posting more about my trip later this week. I leave you with two pictures taken in the touristy Itaewon district of Seoul. The picture above shows two young university students in Seoul, South Korea, who came up to us to ask us questions for a survey they were doing of foreigners in Korea. They were language students and had to take a picture with us to show to their professor to prove they had really interviewed a foreigner. At the end of the interview I asked to take their picture and this is how they automatically posed with no coaching from....cute.....reminded me of Japanese girls.

In the bottom picture, a street vendor was selling an assortment of baby squid and octupi. This is a picture of the baby squid, who look like gummy squid all stuck together. 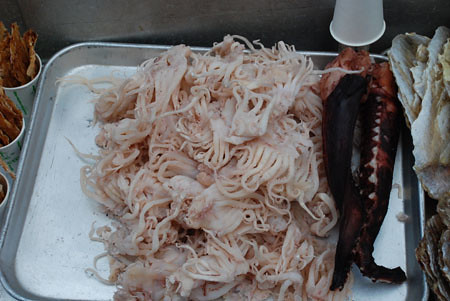 I will be looking forward to hear about your trip.. I love traveling as I post all of pics and videos to the different places I travel to on my DRLILLIY blogand trying new authentic food. Did you try that squid?
I have never been to the far east yet and its a project in the making so Im always interested on travelers views and observations and what to avoid.. kind of like the insiders tip..
Very intresting blog to come across.. I saw it posted as a link in other fellow bloggers..