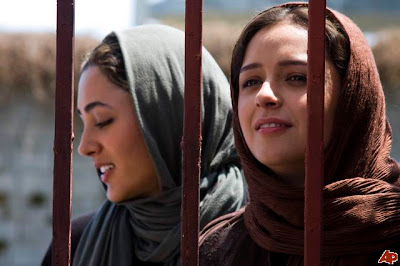 Golshifteh Farahani, left, in a scene from About Elly.

LAST night I went to see the 2009 Iranian film About Elly at the 11th International Film Festival of Brasilia at the Academia de Tênis. Directed by Asghar Farhadi and starring the extremely talented and beautiful actress Golshifteh Farahani, the film is about a group of young, middle class Iranians who spend the weekend at a Caspian Sea resort with tragic consequences.

You may remember Farahani as the alluring nurse in the 2008 Leonardo DiCaprio thriller Body of Lies. She got into trouble with the Iranian regime of Mahmoud Ahmadinijad for appearing in that Hollywood film without prior government permission. For a while there were rumours that she had been banned from leaving Iran, but Iranian authorities must of thought better and she appeared at the film’s US premiere last year. She has since, understandably, because of the restrictions in Iran, moved to Paris, France.

Her latest film has won praise from Western critics, with Screen International critic Lee Marshal calling it “one of the most remarkable Iranian films to surface in the last few years.” I have to disagree. I found About Elly trying my patience at times, the actors and screenplay unable to make me really bother about what was happening on the screen. What is good about the film though is that it gives Western audiences a much-needed look at the lives of ordinary young Iranians, and hopefully make them realize the many similarities with their foreign counterparts.

You can still catch About Elly. It’s being shown today at 7:20 pm, and on Nov. 11 and 12 at 8 pm in Persian with Portuguese subtitles.

Other interesting films being shown at the Brasilia International Film Festival include: Lars von Trier’s Antichrist; Apology of an Economic Hitman; Blind Pig from Indonesia; A Fuga da Mulher Gorila, a Brazilian road movie/musical about two women driving a van across the country, and Outrage, a documentary that outs closeted gay politicians in the US.

For a complete guide to the movies and show times visit the festival’s website by clicking here. It has both Portuguese and English versions. The festival opened on Nov. 4 and runs until Nov. 15.