Many twists and turns in 113 Sul murder case 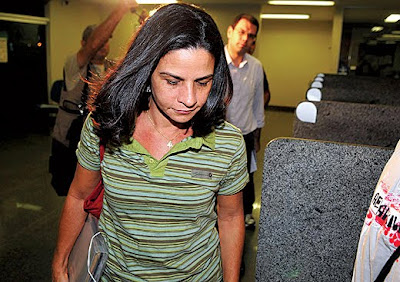 Adriana Villela: She remains the main suspect in the brutal

THE INVESTIGATION into the brutal August 2009 murder of the rich elderly Villela couple and their maid in their sixth floor apartment in the 113 Sul quadra of Brasilia, has so many twists and turns that it is becoming hard to follow at times.

The case remains unsolved more than a year after it was committed, and four police chief investigators have handled the case, the latest one bringing back to Brasilia a surprise confession from the former doorman of the Villela’s building, saying he had murdered the couple because he held a grudge against them.

Leonardo Alves, the former doorman in question, but who was no longer working in Brasilia when the murders took place, initially told police that he had committed the crime with his two nephews, that they had not used gloves, and that they did not clean up the crime scene afterwards. Given that Jose Guilherme Villela, 73, a former judge on the Superior Electoral Court, his wife Maria Carvalho Mendes Villela, 69, and their maid Francisca Nascimento da Silva, 58, had all been savagely stabbed more than 74 times, and that police found the bodies in the apartment without pools of blood, puts his testimony into serious doubt. Investigators at the time said the crime scene had looked like it had been professionally cleaned up, and that they did not find the fingerprints of the murderers in the apartment, which means that gloves were most likely used.

Alves, 44, was tracked down in a small town of Minas Gerais after a police investigator listening into a wiretap overheard two prisoners in the Papuda jail talk about the murders. Police found that the former doorman had opened several shops and allegedly sold some of Mrs. Villela’s gold jewelry to persons in that state.

The 46-year-old daughter of the Villelas, Adriana, who is an architect, has been the main suspect as the mastermind of the murders from the beginning, though she maintains her innocence. Police investigators found out that she was receiving a monthly allowance of R$8,500 a month (around $5,000) from her parents, and that she often argued with her mother over money when she would ask her for more. Her father headed his own law firm, which was a lucrative practice that made millions for him in legal fees from famous clients, which included former Brazilian President Fernando Collor, who was impeached in 1992 for corruption only two years into his term.

Now in a new twist, the ex-doorman Alves this week told police that Adriana had indeed paid him and his accomplices to murder her parents, and most horrifyingly, had been present in the apartment when they were executed. The police say they believe him and are trying to put together a case against the daughter. She had been previously arrested and held for a few weeks during the course of the investigation, but was eventually let go for lack of evidence against her.

The civil police of Brasilia have bungled the investigation from the start, with the first police investigator being yanked off the case by her superiors after she listened to a fortune-teller and followed false clues that she had planted. Police later found out that the fortune-teller was a friend of Adriana, and that the daughter of the Villela’s had told her to go to the police with her clues.

Police investigators say that Alves and his two accomplices used at least 15 mobile phones in conjunction with stolen SIM cards, to cover their tracks. Knives that were supposedly used in the murders have never been found; with police even diving in a river in Minas that one of Alves’ nephews said he had thrown it in.

Adriana’s lawyers have insisted that Alves was motivated to kill the Villela couple because he had several heated arguments with them when he was still the doorman of their building, with an especially heated one after he brought a locksmith to break into their apartment, without their approval, to fix a leaking pipe when the couple were away on a trip.

But police investigators have a long list of suspicious behavior committed by Adriana, and the rebuttal of these doubts by her lawyers has not been very convincing.

Police say they found a partial fingerprint of Adriana’s from her parent’s apartment that will be able to place her having been there between the 28th and 31st of August, 2009, when the murders took place. Adriana emailed the Correio Braziliense newspaper last week to insist that she had never been to her parent’s apartment during that period. She claims her last visit to the apartment was on Aug. 13, 2009, to have breakfast with her parents and give her father a birthday present.

Investigators also point out that Adriana went out of her way to create an alibi for herself on the night of Aug. 28 by calling several friends at night to have dinner with her, and they also noted her absence that night a party that she had been invited to. Adriana claims that she did eat dinner with a friend in the Vila Planalto, but that she went home at 8:30pm because she was tired.

Adriana’s strange behavior in relation to her daughter Carolina was also noticed by the police, who said that Adriana tried to dissuade her daughter from going to her grandparents’ apartment to have lunch with them as she did once a week, after Aug. 28 but before the bodies were discovered. Carolina had repeatedly asked Adriana where her grandparents were since they were not answering their phones. Investigators note that Adriana did not call her parents or attempt to visit them in their apartment from Aug. 28 to 31.

Adriana’s lawyers have pointed to the changing testimony of Alves as proof that the police are coaching him in what to say in order to bolster their premature conclusions. Unfortunately for Adriana, her alibis are not very good ones and she continues to be the main suspect as she remains to benefit the most financially from the brutal murder of her parents if she is found innocent.