Micro-Storm Knocks Over 50 Trees in Brasilia! 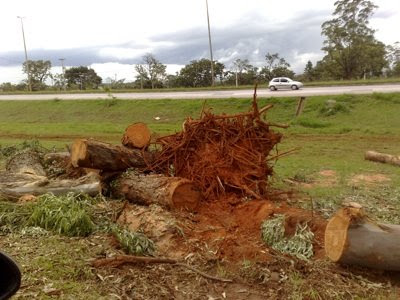 COMING home Friday afternoon from having my dentist finishing pulling the last roots from one of my teeth undergoing a root canal treatment, I noticed that the cars coming towards us on the two-lane road were flashing their headlights at us.

“There must be something up ahead,” said my jovial taxi driver.

I just mumbled “yes, there must be,” as my mouth was still numb from the anesthetic and I had finally, or so I thought, been able to send money to my partner in the Philippines after a failed attempt the day before.

“Must be an accident up ahead,” I said to myself. Outside it was raining and gray clouds darkened the afternoon sky.

Suddenly we saw why those cars had been flashing us so urgently. There in front of us was a huge eucalyptus tree lying across the road and completely blocking it. Its earth covered roots stuck in the air, testament to the force of the wind that blown it over.

“No problem, we’ll just drive on the grass around it,” said my driver.

So off we went, swerving to the right and driving around the giant felled tree. But then we saw that more uprooted trees were lying across the road! It was a veritable barrage of fallen wood.

I lost count at 15 trees and with more skillful off-road driving we finally arrived at the turn-off leading to my street.

Later I learned that a micro-storm had hit the area I live in just 20 minutes before I arrived, the strong gusts of wind and lightning responsible for all of the fallen trees that snapped power lines, cutting electricity to our whole area.

The Correio Brasiliense newspaper later reported that 50 trees had been knocked over, and 30 power posts overturned. My mother tells me that they were part of the first trees planted in Brasilia around 50 years ago when the city was first being built. The dry-season of the cerrado here, meant that only small, gnarly trees were to be found here originally. Eucalyptus trees were chosen because they grow so tall and quickly. Now, with many of them having been hollowed out by voracious termites, they are potentially deadly weapons waiting to come crashing down on roads and houses at the slightest provocation. Luckily this time no one was crushed in their car by a falling eucalyptus!

The power finally went on again at 6:45 p.m., just in time for us to have missed the first three-quarters of the last episode of the Negocio da China telenovela.

We thought we were safe after that, but suffered another power cut on Saturday when the electricity went out at 3 p.m. and only came back on after 8 p.m.

As for the remittance I had sent to the Philippines, my friend Marvin’s distraught phone call woke me up on Saturday morning at 1 a.m. to tell me that the Brazilian bank, Banco Rendimento, had forgotten to put his family name on the remittance, which meant he couldn’t get the money!

For me it was further proof of the general incompetence of Brazilian banks. Since it’s the weekend, I have to wait until Monday until I can speak to someone at the bank to get their mistake rectified.