Miss Kosovo should have won the Miss Universe title 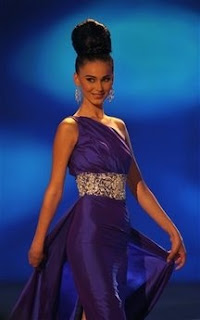 I WATCHED the Miss Universe 2009 beauty pageant on Sunday night, televised live from the Bahamas, and was disappointed that Miss Kosovo Gona Dragusha didn't win the title. She is very pretty in a smart sort of way and had the best evening gown. She wore a tight purple-blue sheath dress, off one shoulder and cinched at the waist by a wide glittery sash. Her hair was piled high in a vertical chignon atop her head, making her look very glamourous a la Audrey Hepburn in Breakfast at Tiffany's.

Unfortunately the judges went for the more conventional beauty of Miss Venezuela Stefania Fernandez, whose screechy voice and china-doll looks irritated me. Her answer to the question of what can women do to overcome the barriers still existent in many corporations was flippant and cliched. "We've already reached the level of men," she said without hesitation. It sounded as if she had learned certain rote answers by heart and was just spewing back what she thought judges wanted to hear.

Miss Australia Rachael Finch was just as glib when she answered that women should be proud to show off their bodies to the question of what she thought of some cultures that made women cover their bodies in public.

As usual the pageant had the usual corny hosts, Billy Bush and Claudia Jordan, who seem to have been chosen for their ability to spew idiotic comments, especially Bush.

I found this year's contest extremely rushed, with many of the segments pre-recorded and edited down to snappy snippets of information about the selected candidates in each elimination round.

I also found the ceilings very low in the Atlantis Paradise Island resort where the pageant was held. This is the original sister hotel of the Atlantis The Palm hotel in Dubai and looks just as gaudy. Both are owned by South African hotel magnate Sol Kerzner, so it was no surprise that his daughter Heather was one of the judges. Actor Dean Cain, of Smallville fame, Tamara Tunie and Andre Leon Talley, the campy Vogue editor, were some of the other judges.

Neither Miss Brazil or Miss Philippines made it to the top 15, in the first elimination round of the pageant, which was disappointing. But it was interesting to see that of the top 15 chosen, nine were Europeans, or more than 50% of the total. That is unusual, as Latin Americans and Asians usually dominate beauty pageants.

Even the crowns this year seemed diminished from the usual Mikimoto pearl crown. This year there were three different designs to choose from, but all were made with "man-made jewels", which seemed tacky to me. Give me pearls any day, or diamonds, over man-made pearls. 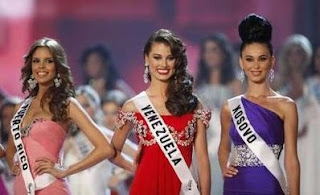 Hello Rasheed, a great post, thanks! It's funny that you mention Asians usually dominate pageants like Ms U. But if you check out my blog, you'll see that Asians feel discriminated against. :) I find this difference of perception quite interesting... here is my blog, hoping you could visit it and share your thoughts as a non-Asian. I'm guessing you're not? Thanks much! http://adventuresofabeautyqueen.com