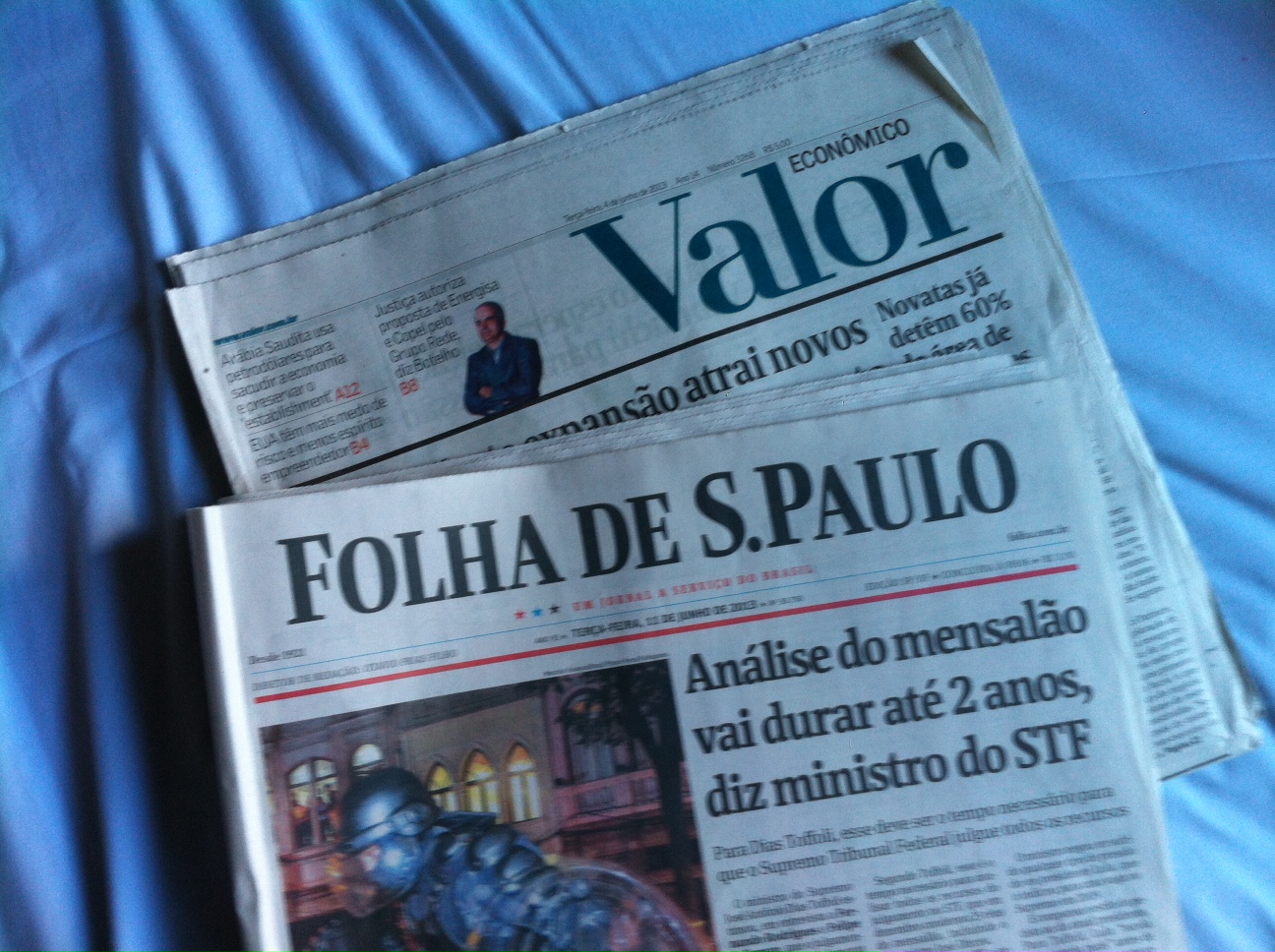 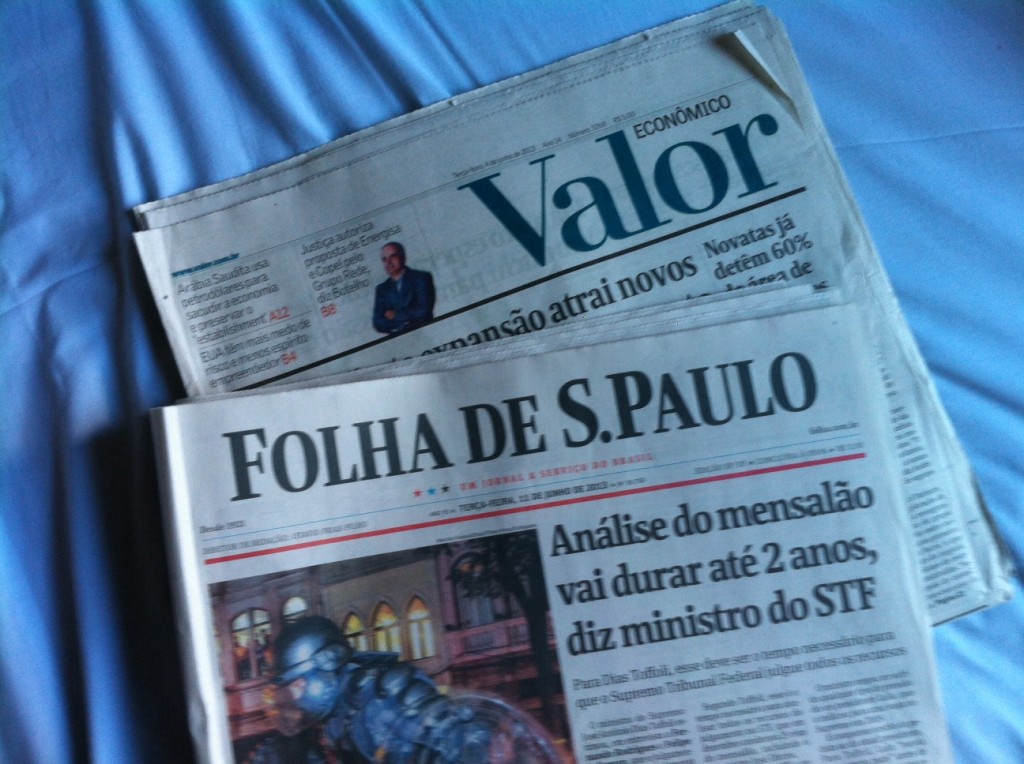 Both the Folha de Sao Paulo and Valor Economico dailies

BRASILIA, June 11, 2013 – The cuts in editorial staffs of Brazilian publications this year continues unabated, with the huge Abril group getting ready to close or sell up to 11 of its magazine titles, including the Brazilian edition of Playboy magazine, which it started printing in 1975 during the military dictatorship. According to sources at Abril, the choice was down to closing down its popular newsweekly magazine Veja or Playboy. Veja won that round. And it’s probably not surprising, because in this age of free porn on the internet, sales of Playboy have slumped in Brazil. Sales of the magazine in the last few months slid 38.52% from 221,700 copies a month to 136,300 copies. Plus its habit of paying famous Brazilian women up to R$1 million each (US$464,371) to pose for its covers, surely did not make business sense over the last few years.

Abril is also shutting down its MTV Brasil channel by December. All of this comes on the heels of the death of Abril’s editorial director Roberto Civita on May 26, 2013, following a long illness. He launched both Veja and Playboy.

Despite making R$2.8 billion (US$1.3 billion) in profits last year through the publication of its 52 titles, the Abril group has R$100 million (US$46.43 million at $1=R$2.15) in debt that it wants to pay off, and it must think that shutting down these publications will help their bottom line. Plus, as most other publications in Brazil are doing, it is pushing its expansion further into digital publishing. 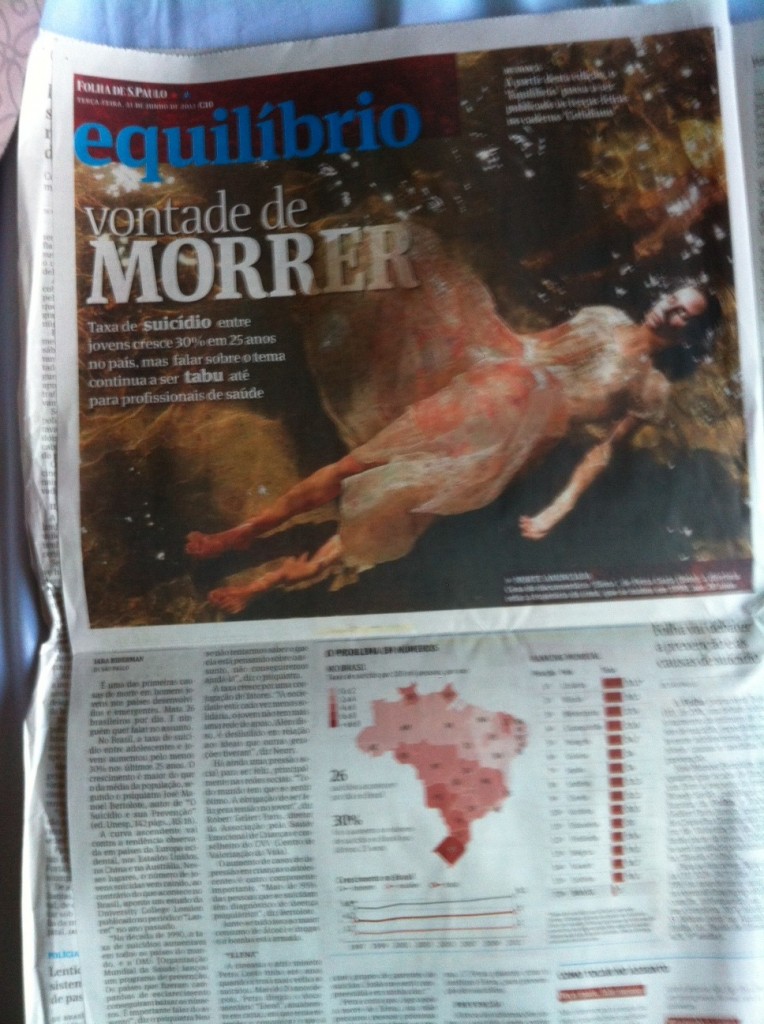 The Equilibrio section has been reduced to just two pages in the Cotidiano section of the Folha de Sao Paulo. (photo by Rasheed Abou-Alsamh)

Brazilian newspapers have also not been slackers in firing editorial staff this year, with the Folha de São Paulo continuously shrinking its printed newspaper by cutting sections, and cutting staff, since last year. Its latest victim was its Equilíbrio section, which was a separate tabloid pull-out. From this week it’s been absorbed into the daily Cotidiano section, and got a miserly two broad sheet pages. (See photo above). The separate FolhaTeen tabloid section was discontinued earlier this year, being absorbed into one of its daily sections. Already this year it has axed 24 journalists.

The Brazilian investigative site A Publica published a long article (in Portuguese) on June 10, 2013, detailing the many cuts in editorial staff at various publications across the country that were taking place. From its interviews it seems that older journalists, who had been at newspapers for 10 years or more, were targeted for the cutbacks, probably because of their higher salaries and benefits that was costing the publications more.

The Estado de São Paulo has also been shrinking its physical paper by closing down sections. This year alone it has fired 31 editorial staff.

One of the biggest shocks came from the business daily Valor Econômico, that announced on May 23, 2013, that it was slashing 50 positions, 30 of these editorial ones, and the rest administrative ones. Owned jointly by the Folha de São Paulo and O Globo newspapers, Valor launched in January its own real-time business news service called Valor Pro, using its own terminals, at an estimated cost of R$100 million (US$46.43 million). This was used to justify the firings, despite the company admitting that it saw ad revenue grow 20% in 2012. Again, Valor alleged that it could not afford to keep paying the high salaries of the fired journalists.

O Globo has let go of some of its staff, but nothing on the scale of the publications based in São Paulo. A source told me though, that in May all spending had been frozen at current levels at O Globo until the situation improves.

Other smaller Brazilian newspapers and magazines have also cut staff this year, with the Diario Catarinense cutting 20 jobs in March; _A Crític_a of Manaus cutting 15 journalists in April, and A Tribuna in Santos, SP.

The leftist magazine Caros Amigos caused a stir in March when it fired its entire editorial staff who had been on strike after their publisher had slashed their salaries by 50% because of a slump in circulation and sales. The publication’s director general told the Folha that newsstand revenue had fallen 32% in the last three years, and ad revenue had fallen 12-15% in the same period. Although the magazine only has 9,500 subscribers, its publisher maintains a monthly print run of 30,000 copies in order to keep the magazine’s visibility on newsstands. “Although we are a leftist publication, we are also a publishing company that survives on its income and that has accumulated many debts,” said Wagner Nabuco, the magazine’s director general, to the Folha. “Many people on the left think this is the discourse of a liberal businessman. But the reality is that we are a company that exists here in this capitalist world, and not in some other place.”

Despite celebratory stories in early 2012, such as this one, which celebrated a rise in the circulation of Brazilian newspapers —2.3% in the first semester of 2012 -- the situation in 2013 is much more sober and worrying. According to the Instituto Verificado de Circulação (IVC), the growth in newspaper and magazine circulation in all of 2012 was a meager 1.8%, with all of that growth coming from the digital publications of these newspapers and magazines, which grew a stunning 128% from 2011 to 2012. The digital side of publications already account for 3.2% of all circulation.

The Folha, Globo, Valor and Estado newspapers have seen that the future is digital and have invested heavily in redesigning their websites and advertising their digital subscription packages.

One glimmer of light was the hiring of 20 local journalists in Brasilia by Abril recently to launch a weekly city guide that is being sold with its Veja weekly.

One hopes that the cuts in editorial staff will diminish and that experienced hands be offered creative solutions – such as accepting moderate cuts in salaries for those earning highly – so that a fountain of experience and wisdom doesn’t get thrown out in the process of cutting costs.