Nicole's recantation: The end of a sad and sordid tale? 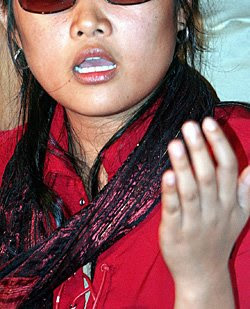 'Nicole' in a file photo after the trial of Daniel Smith. (Photo courtesy of Philippine Star)

THE news that the Filipina allegedly raped by a US Marine in 2005 recanted portions of her testimony last week, saying that she now wasn’t sure if what happened to her that night really constituted rape, came as no surprise to me.

Suzette S. Nicolas, or ‘Nicole’ as she became known in the Philippine press, gives a different and damning recollection of the events of the night she spent with Lance Cpl. Daniel Smith in the sworn affidavit dated March 12, 2009.

“I had no opportunity to deny in court that I kissed Daniel Smith but with the amount of alcoholic drinks I took, my low tolerance level of alcohol and with only a slice of pizza all night, it dawned upon me that I may have possibly lost my inhibitions, became so intimate with Daniel Smith and did more than just dancing and talking with him like everyone else on the dance floor. Looking back, I would not have agreed to talk with Daniel Smith and dance with him no less than three times if I did not enjoy his company or was at least attracted to him since I met him for the very first time on the dance floor of Neptune Club,” she says in her new statement. (Emphasis added by me.)

“If the travel from Neptune Club took only several minutes and with the driver of the van trying to beat the curfew time of his passengers, how could I have instantly regained my consciousness and talked to people upon reaching the seawall of Alaba Pier? When people gathered around me at the seawall, everyone seemed to have drawn the conclusion that I was raped except for one who called me a bitch,” ‘Nicole’ further says in her statement.

It is interesting to note that she seems to be cross-examining herself in this new affidavit. Gabriela partylist Rep. Liza Maza also said she thought the new statement sounded like ‘Nicole’ was questioning herself:

“The details were very surprising, it was as if she was cross-examining herself. And reading through the statement, one can tell that it was written by a man,” she told the Philippine Daily Inquirer.

Many politicians and activists have been saying that Nicole’s recantation of the facts is a conspiracy by the US and Philippine governments to get Smith released so that the Visiting Forces Agreement, that the Philippines signed with the United States in 1992, can remain in effect.

Many Philippine politicians have been calling for the current VFA to be scrapped, saying that it favors the US and allows US military personnel to remain outside the Philippine penal system if they commit crimes in the Philippines. The ongoing legal tussle over where Smith should be held, who is currently being held at the US Embassy in Manila, is pointed to by many as a violation of Philippine sovereignty.

Smith was found guilty in December 2006 of raping ‘Nicole’ and was sentenced to up to 40 years in jail.

But the truth of the matter is that the US does not allow any country in the world the right to imprison US military personnel, so in that sense the Philippines is not being treated any differently by the Americans. The hard truth is that the Philippine government wants to maintain good relations with the US and remain under the protection of the US military umbrella in case of both external and internal threats.

It is also a fact that parts of the VFA are written in language so vague that it allows interpretations of it that favor the US.

The US is insisting that it has the right to maintain legal custody of Smith until the completion of all legal proceedings. Smith has appealed his conviction to the Court of Appeals.

It is interesting to note that ‘Nicole’ left to the US after making her new statement; that she has an American boyfriend of two years whom her mother claims has been asking ‘Nicole’ to join him in the US for a while now, and that the notary public for Makati City, Abraham Rey M. Acosta, who took down ‘Nicole’s’ new statement, is also an attorney in the powerful law firm of Sycip Salazar, which is representing Smith.

I still think that ‘Nicole’ was partly to blame for what happened to her. Why did she dance so many times with Smith if she didn’t like him? Why did she kiss him passionately in the bar, if she didn’t want to have sex with him? The truth is that she was sexually aggressive with him and definitely led him to believe that the night would end in sex.

Was it right for Smith to take advantage of a ‘Nicole’ that was so drunk she passed out in the van? Certainly not, but given the circumstances and what had happened for hours before that, I’m not surprised that the young, hot-blooded US Marine decided to take advantage of ‘Nicole.’

And as for the P100,000 that ‘Nicole’ flew off with to the US to start her new life with, it was part of the moral and exemplary damages that she won in her trial against Smith.

I think the CA will take ‘Nicole’s’ new statement into account and release Smith allowing him to return to the US. His military career is now ruined, which seems to me to be punishment enough for what he did.

Maybe Smith paid her off to recant her story? Way too complicated at this point!