OFW votes could give Marcos a win 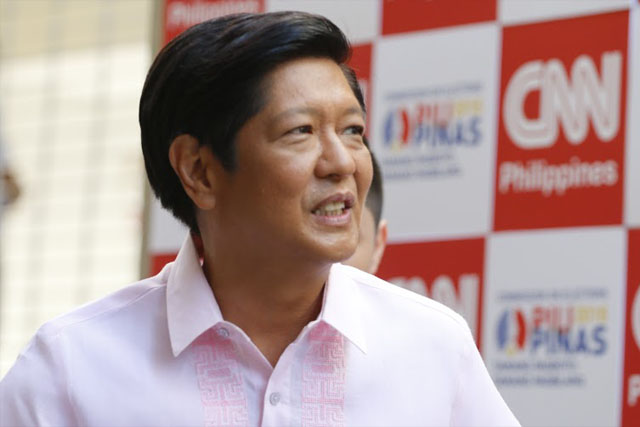 National elections in the Philippines, which took place on May 9, are producing surprising results. In the presidential race Rodrigo Duterte, mayor of Davao City, and a politician with a mouth like Donald Trump, has won the race with 15,709,136 votes, against the 9,663,869 votes of administration candidate Sen. Mar Roxas.

But it is in the race for the vice presidency where things are tight. With 95 percent of the votes already counted, Sen. Bongbong Marcos, son of former dictator Ferdinand Marcos, was initially leading, but then on the 10th was surprised by the overtaking of Rep. Leni Robredo. At the time of this writing, Robredo leads with 14,012,780 votes against 13,797,137 votes for Marcos, a difference of only 215,643 votes. The more than 400,000 votes of Overseas Filipino Workers are just being tallied now, and Marcos is leading in that part of the poll.

As of Saturday morning, Marcos had garnered 156,123 votes from OFWs, against only 84,144 votes for Robredo. This gives Marcos an edge of 71,979 among the OFW votes. If the trend continues, this would give Marcos a comfortable margin in beating Robredo.To a casual observer from outside the country, it may seem that the Marcos family is only now returning to power, but in reality this has been going on for many years. Bongbong’s father, Ferdinand, was an intelligent and charismatic lawyer from the north, who was elected congressman in 1949, and then re-elected three times. In 1959 he was elected to the Senate, and in 1965 was elected president of the Philippines. In 1954 he married Imelda Romualdez, a beauty queen and singer from Tacloban, who won Marcos with her beauty and lovely voice. It was she, with her relentless ambition, who encouraged and pushed her husband to steal billions from the country during their 21 years of conjugal dictatorship.

In September 1972, Ferdinand Marcos decreed martial law, suspending the constitution, closing Congress, jailing political enemies and seizing profitable businesses for himself and his cronies. Philippine Airlines, ABS-CBN television network, the Manila Electric Company and the PLDT phone company were all snatched by Marcos and his close friends. To hide this wholesale robbery, Marcos put many of these companies in the name of his allies.

But Bongbong was the first in his family to return to the Philippines in 1991 and was elected congressman. He had been deputy governor and governor of Ilocos Norte province during the dictatorship, so his return to politics was relatively easy. His mother, Imelda, soon also returned to the country and was also elected to Congress. Bongbong was elected to the Senate in 2010.

Through the massive corruption of the Marcos couple, it is estimated that a total of $10 billion was looted from the country, and the following democratic governments were able to recover only a small fraction of this stolen wealth. Nevertheless, there has always been a very solid base of Marcos supporters in the electorate. These people believe that the Marcoses did many good things for the country and its people, claiming that they built much of the modern infrastructure that the country has today.

Yet despite these hardcore Marcos supporters, there is a larger portion of the population that was and still is against the political rehabilitation of the Marcoses. But they have found the forgetfulness and willingness to forgive easily of many voters as their biggest obstacles to stopping the nation from forgetting the violent excesses committed from 1972 until 1986.

To add to the horror of the critics of the Marcoses has been the new generation of voters, those born after the end of the dictatorship. Most of these voters do not have a negative view of the Marcoses, believing that Ferdinand did much good for the country by leading it with an iron hand. Therefore a group called the Campaign Against the Return of the Marcoses to Malacañang recently produced a dramatic video in which young voters were filmed talking about what they thought of the dictatorship years in front of people who were tortured and raped by the regime. When these victims reveal what happened to them, the young voters are stunned and amazed, and some even break down and cry, asking for forgiveness for their mistaken ideas.

But should we hold a son responsible for the sins of his parents? The Philippine electorate will have to decide that. But from the votes coming in, it seems they are ready to forget and forgive, placing Bongbong that much closer to the presidency.