Overheard at a screening of Bruno 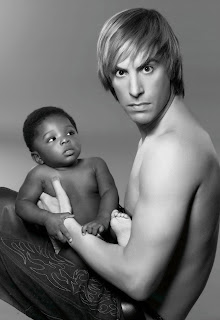 I WENT to see Sacha Baron Cohen’s hilarious new movie Bruno on Friday night and overheard some interesting snippets of conversations while I was waiting for the movie to start.

My usual companions for watching movies, my childhood friend Camille and her family, were not there because her son Nick was sick with a throat infection. I was anxious to see Bruno because of the preview I had seen so I decided to go alone. Thankfully I didn’t cringe at all while watching it, and chuckled several times during it. I did find it strange that I was watching a gay movie with so many straight couples in the audience, but hey in this day and age, and with Cohen’s popularity from his previous hit Borat, I guess I shouldn’t have been surprised to hear straight people laughing at his very queer jokes.

In any event, I was also pleasantly surprised to notice how many interesting snippets of conversations around me I was able to hear since I was alone and not in a group.

A black American couple sat in the row behind me with Cokes and buttered popcorn. I know because they were in line next to me as I bought myself a Coke Zero.

“Do you want extra butter,” the American man had asked his female companion.

I wanted to butt in and say that would be a mistake since the butter they use in that theater has an artificial taste and smell that I find quite yucky. But I kept quiet.

When we were seated in the theater I heard the woman say:

“What do you think Barak Obama would say about that?”

She was talking fast, but I understood her the first time.

“Come again, can you repeat that?” her slow companion asked.

“What do you think Barack Obama would say about ….,” she repeated, her voice tapering off so I couldn’t hear the end of her sentence.

A few minutes later I heard the guy telling her:

“Don’t you think this popcorn is greasy from the butter?

“Yeah I agree. It is greasy!” she replied.

Finally they had realized their folly of asking for extra butter on their popcorn, I thought to myself.

Two young good looking guys and a young woman made their way up the aisle looking for seats. One of the guys fake sneezed and then laughed.

“I sneezed on this old woman the other day and she was so upset that she started crying!” he told his companions.

The old woman was so upset because of the swine flu epidemic that is sweeping Brazil and the rest of the world. There have been many deaths here, of both young and old, so joking around and fake sneezing on strangers is not a very nice thing to do right now. But hey, they’re teenagers and they thought they were very clever and funny.

Hahaha, NOT, I thought to myself.

Just before the house lights went down for the previews and then the movie, I heard the voice of a young Brazilian guy saying:

“Oh don’t worry she’s going to be thin soon. I used to be a whale and then I lost a ton of weight,” the voice said.

And with that I sat back and enjoyed the antics of Sacha Baron Cohen as the gay fashion journalist Bruno, who desperately tries to become famous in America.

PROJECT IN BRAZIL BUILDING WITHOUT THE NEED FOR NATURE Agreda

You can help us achieve this dream?


Help us to spread this request to other pages on the Internet.

If possible, we need your help (donations) for this project where we want to build a house in the City of Pirambu-Sergipe-Brazil ecologically correct.
I am Brazilian, living in the city of Aracaju, Sergipe - Brazil.
I have an excellent tourist city in the land of Pirambu, coastal town located 32 km. in Aracaju, Sergipe - Brazil.
I use my land to build a house in this area ecologically correct to show the man who can build good and beautiful places on the coast, without harming the nature.
I want to do this project, a reference in the region (Northeastern Brazil), to show the regional community and, if possible, to all Brazilians who can build houses to live without the need to harm nature.
We need your valuable assistance in realizing this dream (project).
I need donations, may be of material such as bricks, cement is more than anything Ecological building the house, or you may prefer cash to buy the material for construction.
Our compromissocom you will be to inform you if you want the whole progress of the construction of the house until its final conclusion.
I invite you to participate in this project, is of this body or away, your participation is important for performing and completing it.

Let's show the man who can and should respect nature and we can build without the need to harm the environment.

For those who prefer to help with donations of money, inform the data below the bank for donations.

More if you want to participate with donations of material, and so on look at Pirambu = arem-Foire Sergipe and if necessary may request further information.

Your help has two aims in achieving our dream of building the house itself, and while this home is refeencia to show the Northeast of Brazil and perhaps for all of Brazil, we live in and with nature without necessiade of agredila .

Sinceramenmte your cooperation will be important to realize this dream, your donation can be 1 cent or 1 thousand dollars, the important and their participation in the realization of this dream and know that all the bricks for this house, it is also helps.
Thanks to all who help and those who may not have had more help the good intention.
Wellington Silva
City of Pirambu, Sergipe - Brazil

I am looking for a Brazilian conciente which fulfill the duty to contribute to the preservation of nature.

WARNING: The donations for this project is valid for one year deadline for completion.