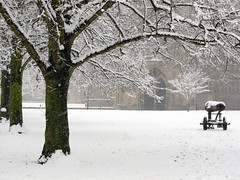 When I first moved to Jeddah in December of 1987 there were only two TV channels to watch. Well, there were actually three sometimes: Channel 1 and Channel 2 of Saudi TV, and Egyptian television, that we were able to catch when the weather was good.

Orbit launched pay-television in 1991 and shortly afterwards satellite dish receiver sets were flooding the market and we had a chance to escape from the mediocre fare that Saudi TV offered us. Channel 2 was especially annoying with its Saudi presenters who mangled the English language with their strange "American" accents, and American TV series that were butchered beyond comprehension by censors eager to chop out any kiss, hug or untoward contact between the opposite sexes.

Not much has changed. Both Saudi TV channels now have snazzier graphics, but not much else has improved. Thus it was with pleasure that I stumbled upon the period drama The Castle this morning in my hotel room.

Set in 19th century Russia, this super-production of Saudi TV was filmed in 1999 in Syria, with the outside shots done on location in Russia. Starring the famous Saudi actor Nasir Al-Gasabi of Tash Ma Tash fame, the series was written by Farouq Mohamed and filmed by Yevin Felerov.

Dubbed into English, the series looks like something out of Dr Zhivago but with Arab actors and sentiments. It was funny to watch Saudi actors with their dark olive skin, wearing 19th century outfits and sporting long hair tied back in ponytails. Set in vast homes, with candles everywhere, there are velvet cushions, brocade curtains, and fur throws on heavy, carved-wood beds.

The dialogue is typically Arab, with a young, beautiful woman asking her father about a man that he wants to marry her off too. A scheming older woman, but beautiful and with hair for days, asks an innocent maid where certain keys to bedrooms of male relatives are kept, and the maid happily tells her where they are kept.

I find it ironic that I only discovered this gem of period Saudi television ten years after it was filmed. I blame Orbit for that. BBC eat your heart out!

Nice Blog i like it.. keep update the blog..